To celebrate Father's Day, this year we have spoken to fundraiser and dad-of-two Tom Finkill.

Tom and his family live in Bury and support Royal Manchester Children's Hospital Charity. To date they have raised more than £15,000 for the children's hospital thanks to an idea Tom had during the very first Covid lockdown.

Tom found himself without work when his events industry job was no longer viable, but knew he wanted to spend his newly-found spare time doing something for a worthy cause. He started doing online quizzes for Royal Manchester Children's Hospital Charity and then, when businesses started to open back up, he organised an epic 48-hour long quiz broadcast live from his local Red Hall Hotel in Bury. The final few hours saw friends and family join him at the hotel to countdown the last few minutes of the quiz. Earlier this year, to mark two years since his first bit of fundraising, the Finkill family once again supported our hospital with another quiz and ball - this time at an in-person event giving Tom, wife Gemma, and children Sofia, now seven, and 12-year-old Charlie the chance to meet some of the amazing quizzers who had supported him over the last two years.

The Finkill family wanted to fundraise for the children's hospital after Sofia had an operation on her hip at Royal Manchester Children's Hospital. You can read more about Sofia and her surgery in our story: Sofia Is Inspiration Behind Lockdown Fundraising and our follow-up article: Become a Guinness World Record Holder....by Sitting on the Sofa.

We're still waiting to hear if Tom's 48-hour online quiz has made it into the Guinness World Record books, but in the meantime we decided to find out what he'd be doing for Father's Day....

What will you be doing this Father’s Day?

Usually I am working on Father’s Day and unfortunately this year is no different. But I guess Father’s Day looks different for everyone – I’m sure there will be plenty of NHS staff who are dads who are working. And sadly some dads will also be spending time in hospital because they’re poorly themselves or they’re spending time with a child who is ill.

But whatever people do for Father’s Day, and whatever day they choose to mark it on, it’s about celebrating your family and how special that bond is between a father and his kids.

As I’ll be working, our Father’s Day has been postponed until the following weekend. But Sofia and Charlie always do something nice to surprise me. Sofia might make a present and Charlie might do breakfast with Gemma. I know they’ll have some surprises waiting for me when we do get the chance to celebrate. You’ve raised more than £15,000 for the Charity. Tell us how that came about.

Well, it started with Sofia having an operation in hospital and since then it’s led to hopefully being in the Guinness World Records! We started doing online quizzes in lockdown. I work in the events industry so having no work during lockdown really made me look around and survey what important things I wanted to do. Sofia’s hospital experiences were the inspiration, because we wanted to give something back to the people who had done so much for her.

It escalated from lockdown quizzes to a 48-hour online quiz with people from across the UK taking part. And now we’ve raised more than £15,000. When Sofia was lying on her hospital bed I never would have imagined it would take us on this journey.

The 48-hour online quiz was tough, both physically and mentally, but the inspiration behind it all and the things that kept me going throughout were Sofia and Charlie. Why are your children so inspiring?

Sofia has had operations on her hip and Charlie is hearing impaired, so there are certain tones and levels he can’t hear. Both of them have had various ailments and things over the years. But both kids have a real ‘can do’ attitude and they never let things get to them. Not once have they complained or got down. They’re just smiley and happy and always try their best. They’re just so inspiring.

I’m immensely proud of them and they will always be my inspiration. Whether that’s for fundraising or for other things in life. I cannot be more proud to call myself their dad.

If you'd like to find out more about fundraising for Royal Manchester Children's Hospital Charity visit our Get Involved page now. 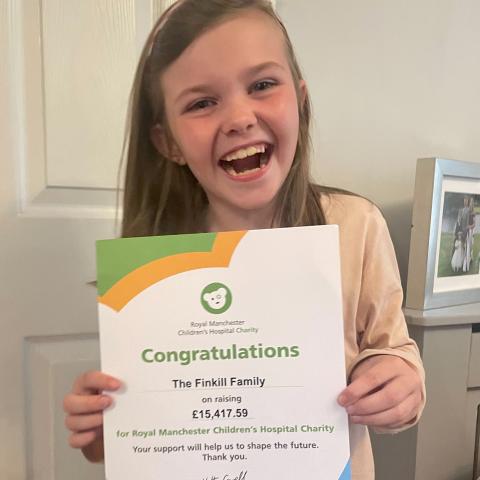