Sofia Is Inspiration Behind Lockdown Fundraising

Sofia Finkill tells her friends the scar on her leg is from a shark bite, or it’s a magic zip…but the real story is just as unexpected.

The youngster’s scarring is actually due to major surgery on her joint after doctors discovered she had a “floating leg” – the joint wasn’t connected to her hip and it was nothing short of a miracle that she was able to walk.

At age three, Sofia was found to have Development Dislocation of the Hip (DDH), which is most commonly diagnosed at birth or in the womb and treated very early on in a baby’s life. But her condition was only diagnosed when her parents noticed her “toddler waddle” hadn’t straightened and she seemed to walk differently to other children her age.

As a thank you to the “miracle workers” at the children’s hospital her family, who live in Hollins Vale, Bury, have raised more than £2,000 for Royal Manchester Children’s Hospital Charity.

“Everything she’s been through she’s always done it with a smile on her face,” said Sofia’s mum Gemma. “She never gets down and she embraces life – we all have that mentality.

“When we noticed she was waddling on her right leg we didn’t know what to think. It was a miracle she was walking at all as the leg was completely unattached from her hip. We saw it on the X-ray and just couldn’t believe what we were seeing. Then to be told she’d need major surgery to fix it…that was a big shock.”

Sadly it wasn’t the first time Sofia had experienced life on a hospital ward. When she was just three months old she was diagnosed with periorbital cellulitis – a common eye infection which unfortunately spread and required hospital intervention. Later, aged three, Sofia required urgent medical attention at her local hospital when she developed pneumonia. Surrounded by oxygen tubes and being pumped full of life-saving medicines, Sofia still had a grin for mum and dad.

Her father Tom said: “Sofia is still young and has been through so much in her life, but she’s always done it with a smile on her face. She always shows such determination and is the life and soul of the party!

“After her first stays in hospital when she was little, at about three years old we noticed she was quite unsteady walking. We took her for X-rays and we just couldn’t believe the image on the screen – her right leg was just sort of floating there and not connected to her hip at all. How she wasn’t in agony and she was still walking is just a miracle – it just shows how resilient our little girl is.

“We were sent to Royal Manchester Children’s Hospital and I just didn’t realize we had such a wonderful children’s hospital so close to home. They were fantastic the entire time.

“The surgery she had was quite intense – they had to break her leg bone and then reposition it and put metal plates in to hold it in place and form a joint for her leg and hip. In total she was unable to walk for about eight weeks but nothing has ever fazed her. She walked out of hospital using her walking frame with a huge grin.

“She now loves showing off her scar and tells people it’s a shark bite. Sometimes it’s a magic zip where babies come from. I’m not sure where she got that one from!”

Sofia, who is little sister to brother Charlie, aged 11, is now awaiting more surgery to have the metal plates removed and it’s likely she will continue to be an outpatient of Royal Manchester Children’s Hospital for a number of years.

“She’s six now and very lively but she won’t ever be able to bounce on a trampoline or ride a horse because if she landed awkwardly it would ruin her leg,” explained Gemma. “We’ve also been told she’ll probably get arthritis when she’s about 30, but that’s a long way off yet and we don’t know what advances there will be in medicine during that time.

“Rather than focusing on what she can’t do we focus on the things she can do – she loves dressing up and doing crafts. The other day she spent the entire day dressed as Bo Peep, but although she likes princesses and things she also loves putting on a black wig and being Edna Mode from The Incredibles or Beetlejuice. We call her our crazy Tasmanian devil.”

Resilience is a running theme in the Finkill household. Sofia’s brother Charlie is hearing impaired but has never once let this stand in his way. And when dad Tom lost all his work in 2020, he turned to the virtual world to reach out to people. He’d previously worked as an event host and DJ but went from a chock-a-block calendar to cancelled gigs and an empty diary.

“I started off doing ‘Sofia’s Bedtime Stories’ and reading from Sofia’s big collection of books on Friday nights,” said Tom. “From there we branched out to Never Gonna Quiz You Up for families to play and we set up a group on Facebook.

“I’m not medically trained or a key worker but I knew I wanted to help people in some way and try to put a smile on faces. I couldn’t believe how popular they became and soon we had people from all over the world joining in the quiz from California, Dubai and New Zealand. People I’ve never met before are now friends.

“We also had some really nice comments – one family told me their teenager was on the brink and really struggling but joining in the quiz with the family each week brought them back together as a family. A sense of community developed even though we were miles apart – it was nice to get a good thing out of a bad situation. And hopefully soon we’re doing a pilot episode for a TV programme, so things really have gone from strength to strength.

“I was mindful lots of people had financial worries at that time, but one week I said if anyone fancied donating some money to Royal Manchester Children’s Hospital Charity that would be great. I honestly thought it would be about £100 but it ended up being more than £2,000. It was phenomenal.

“I definitely want to do more to support the Charity – the hospital has done so much for Sofia and our family. I can’t thank them enough.”

The money raised by the Finkill family will go towards treatment, research and care projects that benefit the 280,000-plus young patients and their families who visit the hospital each year. In total, they raised £2,150 which has been divided between Ward 78 and the Therapeutic and Specialist Play Services department.

Georgia Sleigh, a Community Fundraising Officer for Royal Manchester Children’s Hospital Charity, said: “Anyone who talks to the Finkill family or joins in one of their events can’t help but leave with a smile on their face – we could all learn a lot from Sofia. She’s such a determined little girl and full of positivity and energy.

“In the last year we sadly lost a lot of our normal income streams to the pandemic, so Tom’s fundraising was a real blessing and will support some vital projects at the children’s hospital.

“We’re always on the lookout for anyone who’d like to fundraise for us in a Covid-safe way and I’d urge families or individuals who would like support in getting started to get in touch.” 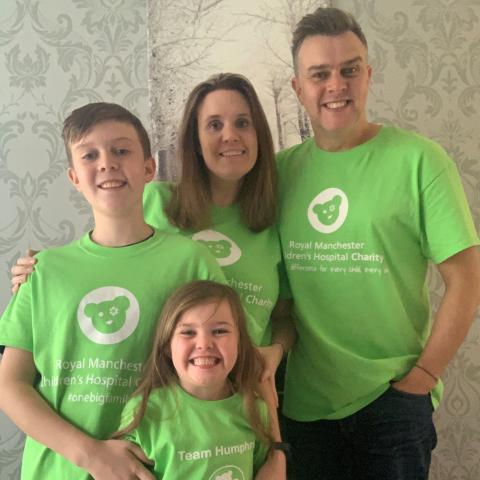