Ava was just 2 years-old when she was diagnosed with a brain tumour. She told her mum, Charlene, that she felt dizzy, like the room was spinning. Over the next few days Ava became sick, lost her sense of balance and started holding her head tilted to one side.

Charlene knew straight away that something wasn’t right and took Ava to A&E where a CT scan revealed a mass on Ava’s brain. She was referred to RMCH straight away for an MRI scan that showed that the mass on her brain was a tumour. Charlene said “Nothing prepares you for the shock of getting news like that. We were told Ava had a 20-30% chance of surviving 5 years or more. We were heartbroken.”

Five days later, Ava went into surgery to have the tumour removed. The operation took around 10 hours and revealed that the tumour was cancerous. Ava stayed in hospital for most of the next eight months receiving a total of five gruelling and debilitating cycles of chemotherapy, followed by high dose chemotherapy and a stem cell transplant.

During that time Ava had another MRI scan that showed another small mass in her brain. The doctors weren’t sure if it was left behind during the previous surgery or if it was a new tumour. Ava was rushed into emergency surgery. During this second operation, the surgeon wanted to do an MRI scan mid-way through to check he’d removed the entire tumour. To do this he had to close up the wound and wheel Ava out of theatre for an MRI scan in a different part of the hospital while she was still under general anaesthetic and ventilated.

The MRI scan that showed that there was still a small bit of tumour left, Ava was immediately taken back to theatre to try and remove the last bit.  An MRI scan a few days later showed that the tumour was now all gone. It was amazing news. Ava remained tumour free for two years – then one day or two years. But then one day, shortly after she started reception, Charlene noticed that Ava was tilting her head to the side again. Charlene said she just knew tumour was back. She rushed Ava to A&E where their worst fears were confirmed.

Once again Ava had surgery, and once again, the doctors had to close her up mid-way through the surgery for an MRI scan to check all the tumour had been removed. This scan revealed that there was still a last bit of tumour remaining – a sliver of white on the scan. Ava was immediately taken back to surgery to try and remove this piece.  However, an MRI scan the following day showed it hadn’t all been removed.  The surgeon said he’d removed everything he could see, so the family agreed to take Ava to Alder Hey Children’s Hospital – 60 miles from their home – to use the specialist iMRI equipment there that could better pinpoint the remaining bit of tumour.

It was difficult having Ava so far away from home, especially now that she had a little brother at home who needed caring for too. But this time the surgery took half the time and there was no need to move her mid-way through for an MRI scan.  Ava recovered much quicker and was able to go home a week later, after a final MRI scan showed that all the tumour had been removed. However, during the next part of Ava’s treatment, craniospinal radiotherapy, a further MRI scan showed that the tumour had returned again.  The tumour is now so small, it’s hoped that it will continue to shrink so that Ava won’t need any further treatment.

Charlene says: “Ava is six and a half now and is back at school part time; she’s a happy, cheerful little girl who always has a smile on her face.  We were devastated last year when we learnt that the tumour had returned. Following more brain surgery and gruelling craniospinal radiotherapy, we are hopeful that the remaining tumour, which is now so small, will continue to shrink and that she won’t need any further treatment. Ava needs regular monitoring scans, but she never complains or moans, she’s so brave, she just gets on with it. It’s all she’s ever known.”

Find out more and donate to the iMRI Scanner Appeal. 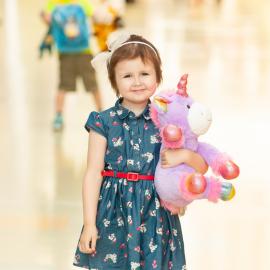