Whitworth Teen Knows What it Means to Wear Green

16-year-old Melissa Sutton is a patient on Ward 84, the regional centre for the treatment of child and adolescent cancers. The teenager from Whitworth, Lancashire is supporting Royal Manchester Children’s Hospital Charity’s (RMCH Charity's) Be Seen in Green Day which is raising funds for the ward where she is a patient.

Melissa was diagnosed with a rare form of bone cancer, Ewings Sarcoma, in October 2014 and since then has been treated at the hospital. She began intensive chemotherapy in November to shrink her tumour and stays in hospital for five days every three weeks while she has her treatment. Melissa has recently undergone major surgery to remove the affected bones.

“Royal Manchester Children’s Hospital, and particularly Ward 84, is now like our second home. It is the best hospital I’ve ever been to; the staff are so welcoming and friendly and her consultant is amazing. When Melissa was first diagnosed I went in to complete shock and it was scary walking on to the ward and accepting what it means to be there. But Melissa was calm and since then has faced her diagnosis and treatment with nothing but positivity and a smile on her face.”

Melissa is a keen supporter of RMCH Charity’s Be Seen in Green campaign which asks people to show their support by wearing green (the charity’s colour) and making a suggested donation of £1. This year Be Seen in Green, kindly supported by Ryman, is on Friday 3rd July  and is open to schools, organisations, nurseries, social groups or even just groups of friends and it is really easy to take part! All that is asked is that participants wear something green to for the day. Not only will participants directly support the lives of patients through the funds raised, they will also be showing your support by donning the colours of the charity for the day.

This campaign will support children with cancer.  Ward 84 is the regional centre for children and young people diagnosed with cancer.  By taking part in Be Seen in Green participants will make a difference to the lives of these children, by helping to raise the final £20,000 needed to fund the redevelopment of the ward.

Currently the ward is quite clinical looking and can feel intimidating to the patients being cared for.  The Charity aims to create an environment which is bright, friendly and welcoming and which will provide comfort and distraction and aid psychological well-being for children suffering from life threatening diseases and who require long or repeated admissions to hospital.

“It can be hard enough being a teenager but being a teenager with cancer is a big deal. The thing I think Melissa finds hardest is being isolated, particularly when she is in the bare and clinical hospital environment, as contact with family and friends has to be minimised due to the risk of infection. Any improvements to the ward that will make it more welcoming, provide distraction and help patients - of any age - face what they have to face, will be invaluable and I can’t thank you enough for your support.”

“Melissa is a remarkable young lady and we are so pleased that she is supporting our Be Seen in Green Campaign.  With this year’s fundraising day we are looking to secure the final £20,000 needed to enhance Ward 84, the children’s cancer ward where Melissa is a patient. Dealing with such an illness is challenging but we want to make life a little easier for our patients by making their surroundings as engaging and comforting as possible.” 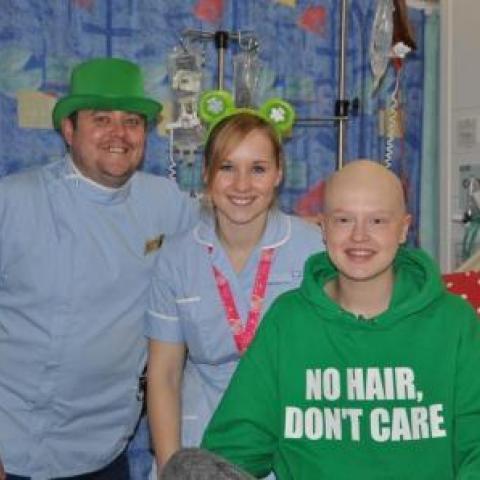