Home > News > We Did It - Target for Helipad Appeal Hit!

We Did It - Target for Helipad Appeal Hit!

The Time Saves Lives Helipad Appeal was launched just last September and thanks to the dedication and generosity of supporters, has hit target a whole year earlier than anticipated. The Appeal took the lead focus of the Charity’s fundraising, with individuals, businesses and community groups from across the North West – and beyond, all showing their support. The Charity received a generous charitable donation of £1million from the County Air Ambulance Trust’s HELP (Helicopter Emergency Landing Pads) Appeal and £1.1million from the government’s LIBOR fines funds in the Chancellor’s Budget.

Maurice Watkins CBE, Chairman of CMFT Charity’s Fundraising Board commented: “I’m absolutely delighted to announce that we have hit target on our £3.9m Helipad Appeal. When we launched the appeal last September we knew it was an ambitious target, so to have completed in just a year is a phenomenal achievement.

“It has been inspiring to see all our supporters in the North West and beyond, come together to help raise money for our Helipad. Every single person who fundraised has played a vital role in securing faster and more effective transfers for critically ill patients of the future. Together our supporters will be making a lasting difference to our patients and their families at the most critical of times, and for this, we cannot thank them enough.”

Funds raised by the appeal will enable the creation of a brand-new 24-hour access primary helicopter landing site, the first of its kind in central Manchester. This much needed facility will allow the Trust to save many more lives and will increase the chances of a full or improved level of recovery in a great many seriously ill or injured patients.

Located on the roof of the new multi-storey car park on Grafton Street, the helipad will be connected to the hospitals by a high-level link bridge and roof top corridor. The Helipad will serve Royal Manchester Children’s Hospital, Manchester Royal Infirmary and Saint Mary’s Hospital which are all based on the central Manchester site.  Collectively, these hospitals see over one million patients each year, looking after patients from birth to the end of life, from across the whole of the North West, and often beyond.

“I’m delighted that the Helipad Appeal has now reached its target. Our ability to speed up the transfer of critically ill children into our facilities will change many lives for the better. Although sometimes this will truly make the difference between life and death, more often it will improve the outcomes of survivors, making the difference between a life accompanied by significant disabilities and a life of independent living. Thanks to our supporters we will shortly be able to provide the quickest and safest way for seriously ill patients to reach our hospital.”

The new multi-million pound helipad will take approximately one year to build - construction work is now scheduled to commence in January 2017 , with the facility due to be operational by the beginning of 2018.

Danielle Rigby, 16, from Bolton, was transferred to Royal Manchester Children’s Hospital by air and road ambulance in Easter 2014.  Danielle was involved in a car accident leaving her with a life-threatening head injury and was airlifted to the children’s hospital via parkland one mile away from the site. An onsite helipad would have meant Danielle would have arrived at the hospital much sooner to receive the life-saving treatment she needed.

Sarah Rigby, Danielle’s mother, says: “Danielle is doing really well now and we are so thankful to all the amazing staff at Royal Manchester Children’s Hospital who saved her life. We know better than anyone how important this Helipad Appeal is, so we are thrilled that it will now become a reality and other families in a similar position will get the expert treatment they need, as quickly as possible.”

The charity still needs the support of those who are currently raising funds for the Helipad Appeal, as all pledges have been included in the total amount raised.

To watch a short film of thanks about the Helipad Appeal please visit: https://youtu.be/4nTH2aztTQk 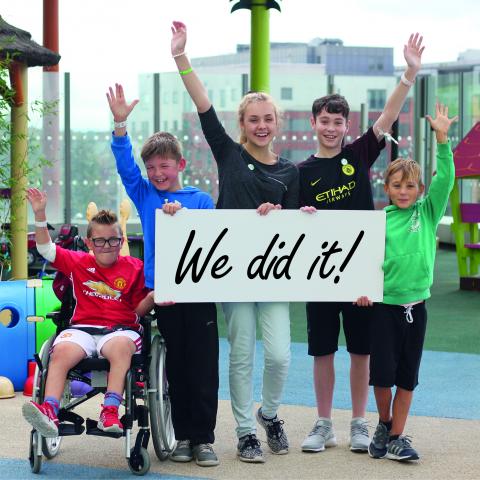