Manchester based Make Events forged a partnership with local businessman and owner of BetFred, Fred Done and his wife Mo to produce a lavish charity ball at the Hilton Deansgate on Saturday night in aid of Royal Manchester Children’s Hospital.

10 months of planning, from Make Events working with Fred and Mo culminated in a show stopping event, full of make believe and surprises.

With 400 guests delighted to support Fred and Mo’s chosen charity, it was a party not to be missed.

The event raised an incredible £189,500. The Salford-based couple have chosen to donate the proceeds towards the purchase of a Miltenyi Prodigy machine for the Bone Marrow Transplant Unit at Royal Manchester Children’s Hospital. The unit treats children with blood disorders, cancers such as leukaemia, and genetic and metabolic diseases.

Having a Prodigy machine at the Children’s Hospital would ensure that families do not need to be separated during this already distressing and anxious time.

Guests on the evening were welcomed into an enchanted world of Make Believe, with unicorns, mermaids, ballerinas and sparkly clouds. Dan Rhodes the young Magician and mingled with the guests in the lavish champagne reception, as guests were served fresh oysters. During dinner guests were entertainment my trapeze artist, String Fusion, a nine piece band and Marcus Bentley, the voice of Big Brother pre-recorded all the announcements inviting guests to take their seats for the evening.  The biggest surprise of the evening was that the entire event was hosted by Vernon Kay.

The auction was a huge talking point. World renowned horse auctioneer Nick Nugent, who Fred knows through horse racing was the auctioneer on the night, raising a huge amount with his unique style.

Prizes generously donated include; a trip on a private jet with a 5-star stay in Europe, a place on the New York Marathon with flights and accommodation donated by Sports Tour International, an exclusive private House Party for at Eclectic Hotels, Didsbury House and a private plane trip in the UK with an overnight stay at a venue of your choice donated by Ged Mason from Salford-based Morson.

Joel and Lorna from Heart North West donated a prize of coming along to the station to be involved with their live breakfast show. The duo were there on the night to present the prize to the lucky winner.

Using a mix of fundraising tools such as a guaranteed prize tombola, silent and live auction, donations and sponsorship, the foundation ball was able to exceed its £100,000 target.

Fred Done said: “Myself and Mo were thinking about laying on a charity ball for a while now. Having worked with Holly Moore and the team at Make Events on a number of corporate and private parties, we knew they had the enthusiasm and creativity to ensure that our inaugural ball was something truly special.

“They donated their time to this and it’s no mean feat. I go to a lot of parties and charity events and this met all our expectations and more!”

Holly Moore, director of Make Events: “We feel privileged to have been able to donate our time to this ball and the marketing team at BetFred have given us their support with contacts and direction during the planning, which has been invaluable.

“The theme of Make Believe worked perfectly and we are thrilled to have played a part in raising over £189,000 for such an amazing cause.” 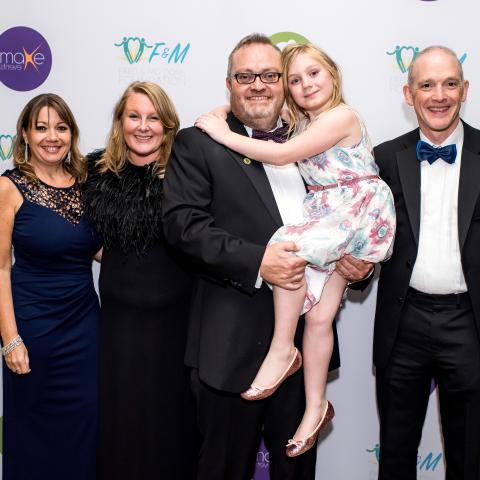