Royal Manchester Children’s Hospital Charity (RMCH Charity) got this year’s Many Hands Campaign off to a flying start with over 40 companies attending its launch event at Manchester’s King Street Townhouse, hosted by BBC presenter, Hugh Ferris.

Renowned businessman and long-term supporter of RMCH Charity, Theo Paphitis is spearheading the fundraising campaign for the fourth time. The retail magnate and entrepreneur made a guest appearance at the launch event, taking part in a Q&A session.

In the event finale, Theo will again be in attendance to form part of a four-man judging panel to assess all entries, awarding the business which presents the most innovative fundraising idea. This year, Theo will be joined by judges Maurice Watkins CBE, Charity Chairman, Managing Director of Wolfe, Laura Wolfe and Chief Executive of Downtown in Business, Frank McKenna.

Commenting on the launch, Theo said:

“Many Hands is an excellent initiative which affords small and medium-sized businesses the opportunity to make a tangible contribution to their local hospital charity. A small business can easily deem its fundraising potential as too slight to be worthwhile but this campaign highlights the reality that by joining together we can make a big difference to a most worthwhile cause. I had a great time at the launch and look forward to seeing each business’s innovative fundraising ideas.”

Businesses at the launch event heard from Dr Peter-Marc Fortune, Consultant Paediatric Intensivist and Associate Clinical Head at Royal Manchester Children’s Hospital who spoke about just how vital the charity’s Helipad Appeal is. Peter-Marc stressed the importance of saving time when dealing with critically ill patients. Comparing the Helipad to a Time-Machine Peter-Marc said that quite simply, by saving time transferring a patient the more chance there is of their survival.

“We are very grateful to Theo for his continuing involvement in this fundraising campaign and for helping to kick-start our campaign at the launch. His profile and very many accomplishments in the business world make him ideally placed to inspire other business owners to engage actively with their local community and we are very confident that his support will help us to achieve this year’s £50,000 fundraising target.”

Monies raised by this year’s campaign will go towards the charity Helipad Appeal at Central Manchester University Hospitals NHS Foundation Trust (CMFT). The Helipad Appeal will enable the creation of a brand-new 24-hour access primary helicopter landing site, the first of its kind in central Manchester. Currently, Royal Manchester Children’s Hospital, along with the Trust’s other hospitals, relies upon a secondary landing site in a nearby park, an arrangement which means that patients initially transported by air ambulance must then be transferred the final mile of their journey by land ambulance. The onsite helipad will allow the Trust to save many more lives and will increase the chances of a full or improved level of recovery in a great many seriously ill or injured patients.

The charity is still encouraging companies to get on-board and to sign up to the Many Hands Campaign. For more information about Many Hands and for details on how to sign up please visit: http://www.rmchcharity.org.uk/events/many-hands-2016 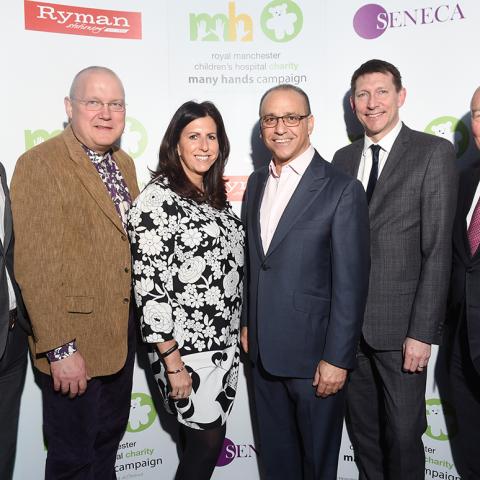