A TENTH challenge event, a tenth birthday celebration and a 10K are all on the cards for one young fundraiser this year.

Long-term patient Declan McEntee, who has had 15 operations, started his “Declan’s Decathlon” with the aim of doing 10 events to raise money for Royal Manchester Children’s Hospital Charity. The events have so far raised more than £16,000 and have included a #ScarSelfie challenge, Be Seen in Green Day and completing 10 laps of Etihad Stadium…. but due to bouts of ill-health the Decathlon has so far remained unfinished.

Declan, from Burnage, has been in and out of Royal Manchester Children’s Hospital since he was born and made headlines in 2015 with his #ScarSelfie campaign to show others that having scars is completely normal.

Now 2019 looks like it will be Declan’s biggest year yet – as he is now old enough to take part in the Simplyhealth Great Manchester Run 10K. The event will be his tenth – which means he can finally complete his Decathlon. This year will also be Royal Manchester Children’s Hospital’s tenth birthday, after the building in Oxford Road officially opened and started receiving patients in summer 2009.

“I think the 10K will be quite difficult, but I’m getting quite competitive with my step-dad Chris so I’d like to beat him,” said Declan, 16. “When I started Declan’s Decathlon I thought I’d be able to do it quite quickly, but then things happened with my health and it had to be pushed back.

“I’m looking forward to finishing Declan’s Decathlon. It has been hard to get back into sport after being in hospital for so long – I was very weak and still get tired easily. But I’ve been trying really hard to build up my fitness.

“Although it’s the end of Declan’s Decathlon it definitely doesn’t mean it’ll be the end of my fundraising. I’ll think of something else to do to help the hospital.”

Declan has been treated for a number of conditions over the years. Since he was born, he has had surgeries and treatments for cystic adenoid malformation of lung, meningitis, sepsis, hearing loss, sleep apnoea and as a newborn needed life-saving surgery on a twisted intestine. He also has an aggressive form of adhesions and suffers complications with blockages in his bowel.

Declan is well-known to clinicians in the hospital, having been in and out for appointments and ward stays ever since he was little. He’s longest stay was four months, while being fed intravenously through a tube. It’s likely he will face more intestinal complications in future, which could be life-changing for him.

His mum Leanne said: “He has wanted to do a sporting challenge for quite a while, but he hasn’t been physically fit enough to do it.

“His uncle ran the London Marathon last year and he really enjoyed watching him, so that really inspired him to do the 10K.

“He’s pleased he’s 16 and old enough to qualify for the main event now, rather than the Junior events. There are more than 20 of us doing it with him, including family and staff from Declan’s former school, St Mary’s Primary School in Levenshulme, so it’ll be a really fun event.”

Declan and Leanne are part of Royal Manchester Children’s Hospital Charity’s Great Manchester Run Video in which Declan draws his ideal superhero – his mum. The video then cuts to a scene of Leanne running in a park, training for the 10K.

She admits she’s not a keen runner, but was touched to be asked to be in the video with Declan. She said: “Declan will be miles ahead of me, but I think he is proud that I’m doing it.

“He has been through so many challenges in his life, so this is a little challenge for me in comparison to what he’s been through.

“In the video I’m pictured as his superhero, but it should be the other way round – he is my superhero.

“Some people feel sad that the hospital is like our second home, but we don’t. We feel extremely lucky to have such amazing facilities right on our doorstep that provide Declan with all the care and treatment he’s received in the past 16 years. If it wasn’t for them, he wouldn’t be here.”

This year’s Simplyhealth Great Manchester Run is taking place on Sunday, 19th May.

Sarah Naismith, Director of Royal Manchester Children’s Hospital Charity, said: “Declan and his family have given us such amazing support over the years – they’ve done a fantastic job in raising awareness of our charity and in raising money.

“I’m so pleased Declan will finally realise his dream and complete his Declan’s Decathlon challenge in style.

“We’ll be cheering on Declan, and all the 10K entrants running to raise funds for us, when they set off from the starting line.”

To sponsor Declan and his family click to visit Leanne's JustGiving Page. 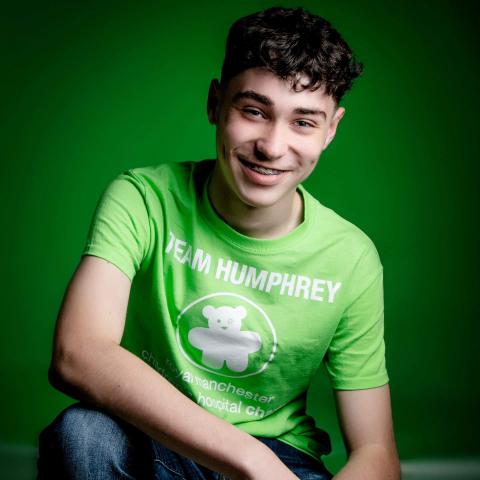