10th BIRTHDAY celebrations will kick off in style this weekend when a band of runners join together for Team 10 at the Great Manchester Run.

The team, who all have very special motivations for being part of the group, will be the first public event to mark 10 years since Royal Manchester Children’s Hospital opened in Oxford Road.

There will be one runner to represent each year Royal Manchester Children’s Hospital has existed at its home in Oxford Road – from 2009 to present day.

Team 10 members will come from across the UK to join together for a commemorative photograph before the race, each holding a placard with their year written on, before heading off to complete the 10K with friends, family and loved ones.

Each member has a special motivation for wanting to be in Team 10 and raise money for Royal Manchester Children’s Hospital Charity – some are parents of former patients, some are still caring for someone undergoing treatment, while others were once patients themselves.

The charity’s Senior Events Manager, Viv Williamson, said: “Team 10 is a very special group of people who hold both the hospital and our charity close to their hearts.

“They are names known very well to the staff at Royal Manchester Children’s Hospital and by the fundraising team. We feel very lucky to have them in Team 10.

“Each and every member has a very personal reason for running in the team and it will be incredibly humbling and moving to see them all together before they set off.”

The 2009 representative will be Adam Lane, 30, from Stockport, who is running in honour of son Harley. Harley lost all his limbs to meningitis when he became ill in 2009. Representing 2019 is Andy Sykes, from Ashton-under-Lyne, whose daughter Pixie-Belle is currently undergoing chemotherapy for a rare brain tumour.

A full list of participants is listed below. Click on their names to find out more about each person.

2010 – Michelle Whalley – running in honour of son Charlie, who was treated for severe burns in 2010.

2011 – Nicola Geldard – mother of Oliver Geldard, born 2011, who is being treated for severe kyphoscoliosis.

2012 – Brooke Taylor – Brooke has been a hospital patient since she was a baby and will represent the year she met the Queen when Her Royal Highness officially opened RMCH.

2013 – Declan McEntee – Declan is also a patient and started a fundraising drive for the RMCH Charity in 2013 called Declan’s Decathlon.

2016 – Ian Cubbin – Ian’s son Josh opened the Junior and Mini Great Manchester Run back in 2016. Josh was formerly a patient of Ward 84, after being diagnosed with Burkitts Lymphoma.

2018 – Mark Willett – Mark’s son Jacob was diagnosed with (Embryonal) Rhabdomyosarcoma of the pelvis in February 2018. 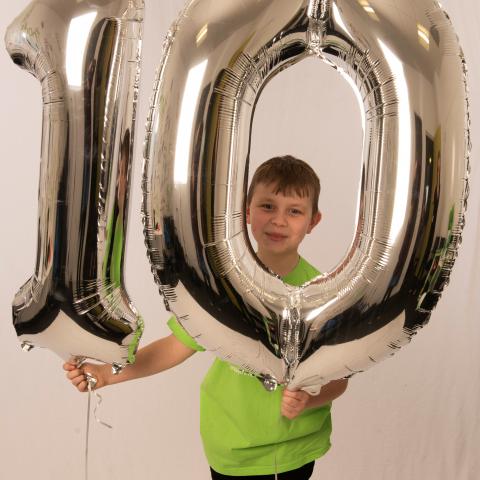