On the 27th and 28th September Steven Berry and a number of his friends cycled 100 miles in aid of his 8-month-old daughter, Daisy, who suffers from Pallister Killian Syndrome – a rare condition which affects only 30 children in the UK.

Steven and his team cycled from Wigan to Royal Manchester Children’s Hospital (RMCH) and back on both the Saturday and Sunday, raising money for RMCH’s Ward 77, where Daisy has been treated. Daisy’s family aims to raise £15,000 by summer 2015 with just under £7,000 raised so far.

Daisy was born in January 2014 with an ovarian cyst. Transferred to RMCH, she was then diagnosed with Pallister Killian Syndrome, a genetic condition affecting the No. 12 chromosome. The condition affects just 1 in 25 million, making it extremely rare. The syndrome can lead to learning difficulties, developmental delay, lack of muscle tone and facial abnormalities.

Each day the riders, 10 on the Saturday and 6 on the Sunday, set off at 8:30am, reaching the hospital at around midday, before setting off back to Wigan. Steven says that the ride went well, apart from a popped balloon getting tangled in one of the bikes on the second day. Luckily, a passer-by named ‘Fisherman Pete’ came to the rescue with a pair of pliers!

Steven then admits that despite no one falling on the ride, he forgot to unclip himself from the bike once he reach home and fell off still attached to the bike! The team also had 13-year-old Jasmine Reeve completing 50 miles on an exercise bike, despite having a broken arm at the time.

As part of the family’s fundraising, Daisy’s older sister Lucy is also doing 10 miles for Daisy. Mum, Jenny, braved the heights and recently completed a zipwire. As a training manager for Busy Bees Nursery, Jenny has also organised national fundraising for Daisy, with Busy Bees Chorley also taking part in an Iron Man Challenge along with many other fundraising activities.

“Daisy has tackled these challenges with little more than a whinge and a cry. Her strength and bravery is inspirational. She is my gorgeous, bright-eyed little girl who has had to endure so much in her short life.”

“Daisy hasn’t had the best start in life and I need to give something back to the people and the hospital that have looked after her, supported her and helped her become the bravest little girl I have had the privilege to know. I am the proudest dad in the entire world.”

“Royal Manchester Children’s Hospital, its staff and the institution specifically Sarah Almond and her team, have been fantastic caring for Daisy, whilst supporting Jenn and I through very tough and difficult to make decisions.”

“The determination and enthusiasm of the Berry family is remarkable. Despite facing the challenges of their daughter’s extremely rare condition, the family are committed to raise as much money as possible, to aid the team who have been caring for Daisy at RMCH. We wish them the very best of luck with their continued fundraising, there is no doubt that they will achieve their goal with the drive demonstrated by Steven when completing his 100 Miles for Daisy.”]

For more information and details on how to sponsor Steven please visit - https://www.justgiving.com/100-miles-for-Daisy/ 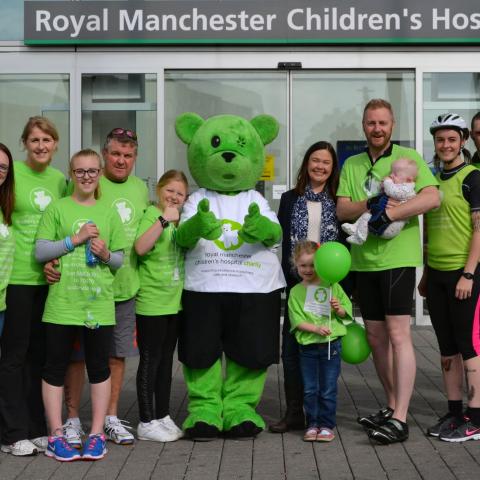