'The Magician', as he is  known among snooker fans, visited to present a cheque for £3,000, a sum Shaun has raised by donating £100 every time he made a break of 100 or more in a competitive match since last year’s World Championship.

His visit raised a smile with the youngsters who came to meet him as Shaun, along with the Charity’s mascot Humphrey Bear, took turns to challenge the young patients to a game of pool.

Shaun, 30, is a long-time supporter of Royal Manchester Children's Hospital, first becoming involved with the charity as a result of on-going treatment for his second cousin Maisie.

As well as the large donation, Shaun, who is based in Worsley, Greater Manchester, is also putting in the miles on behalf of the charity, taking part in this year's Great Manchester Run. The 10km race around the streets of Manchester will take place on Saturday 26th May, with Shaun appropriately taking running number 147, the highest possible break in snooker.

“We were delighted by Shaun’s visit and by his wonderful ongoing support of the charity. For someone with such a demanding schedule to give us so much of their time really is testament to Shaun’s generosity and we wish him every success in the forthcoming World Championships.”

Currently ranked fourth in the world, Shaun is now preparing for this year’s World Snooker Championships, which begin in Sheffield. He said:

“The Royal Manchester Children's Hospital is vital to so many people's lives and the fundraising job that the charity does is outstanding and inspiring. It was great to visit the Hospital again to meet some of the children who are receiving treatment - and also the fantastic staff.

“The '100 pounds for 100 breaks' is something I'm really committed to and I'll be doing my best for it at the Crucible and next season. My aim is to beat the 3,000 pounds we've raised over the last 12 months.” 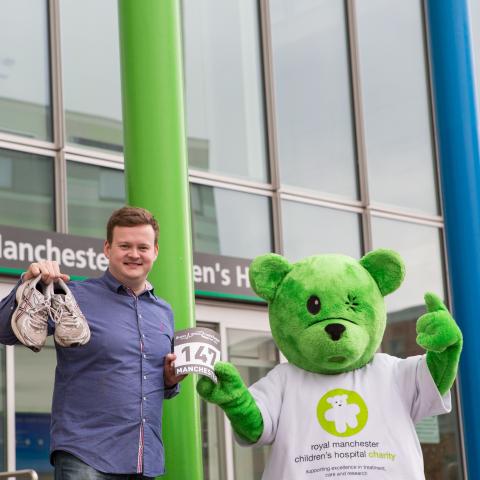