Ruby is a frequent patient at the Children’s Hospital since she was diagnosed with kidney failure two years ago. Wowing judges with her artistic skills, Ruby’s Christmas card will be sold across the North West with proceeds going towards supporting treatment, research and care at Royal Manchester Children’s Hospital.

Ruby was just eight-years old when she first started suffering with frequent headaches. Her dad, Gary, thought that Ruby was prone to migraines but as the pain worsened he took her for tests at their local hospital. The results of the tests were shocking; Ruby was diagnosed with kidney failure, with the results revealing that her kidneys were only working at 15% of their normal capacity.

Transported by emergency ambulance, Ruby immediately began four months of haemo dialysis at Royal Manchester Children’s Hospital, until she had a Peritoneal Dialysis (PD) Line fitted which meant that she could have her treatment in the comfort of her own home. In February this year Ruby underwent keyhole surgery to have her kidneys removed.

Ruby’s dad Gary comments: “We were devastated when we were given the news that Ruby had kidney failure – it was a complete shock to us all as we never thought that she might have such a serious medical condition. Over the past two years Ruby has spent so much time on dialysis – often six nights a week for up to 11 hours at time.  Throughout it all she has been so brave and remains positive. She really is our little superstar and we are so proud of her.

“Over the summer she had problems with her blood pressure so she is now back visiting the hospital four times a week for dialysis. We can’t thank the hospital enough for everything they’ve done for Ruby, the care and treatment she receives is just amazing. At the moment we are undergoing further assessments to decide whether she is now ready to be listed for a new kidney.”

Each of Ruby’s dialysis sessions on the ward lasts for four hours so Ruby spends the time distracting herself by watching her favourite TV shows, or entertaining herself drawing pictures. When Ruby heard about the charity Christmas Card Competition, she was keen to use her artistic skills and enter. Although the treatment can make Ruby feel weak, and she finds it difficult to sit up comfortably during it, she worked hard on her winning card design, even featuring her very own Humphrey bear dressed as Father Christmas!

Sarah Naismith, Head of Royal Manchester Children’s Hospital Charity, said: “Our patient drawn Christmas cards are always extremely popular with our supporters and I’m sure this year will be no exception. We loved Ruby’s design which incorporated our Humphrey Bear mascot; we could tell that she had put a lot of effort into the competition and is a very worthy winner. We’d also like to extend a thank you to Ruby’s school, Oak Tree Primary School who will be selling our charity cards over the Christmas period. Purchasing our Christmas cards is an easy way to support our charity whilst helping to make a difference to the 260,000 patients treated here each and every year.”

To purchase a pack of Ruby’s charity cards or to view our range of Christmas cards please click here. 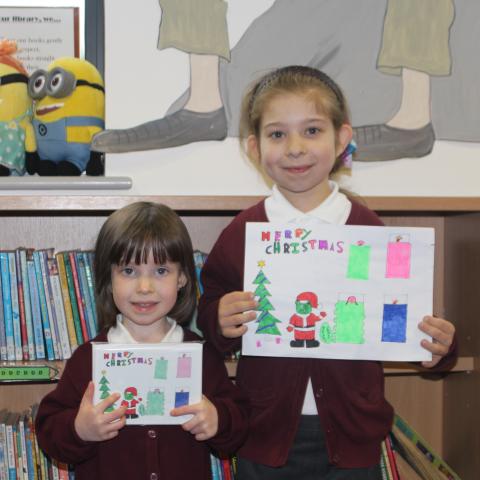