Held at the Midland Hotel in Manchester the event was hosted by the fabulous Heart Breakfast presenter, Lorna Bancroft and was attended by over 200 guests including former Coronation Street star and charity patron, Tupele Dorgu and fashion designer Nadine Merabi who attended with friends including dj and model, Helen Holt.

The day started at 11am with guests enjoying a champagne reception and the chance to shop from boutique Christmas stalls including Clarins, Flo Candles from Altrincham and fashion boutique RUNWAY from Alderley Edge,

The highlight of the afternoon was designer to the stars, Nadine Merabi’s, showcase of her brand new collection. The festive fashion show alongside boutique, RUNWAY saw both daytime and evening partywear being displayed by the fantastic models.

The show follows Manchester dress designer to the stars Nadine’s, flagship label online being relaunched online earlier in the week. Her collection, displayed at Sparkle in the City boasted the very best of her glamourous signature evening dresses. Drunk at Vogue DJ Greg Thorpe then rounded up the day with his party-starting dj sets of disco classics and Christmas favourites.

Guests had the chance to win many exclusive auction prizes including a bespoke, made to measure gown by Nadine Merabi, the chance to join the Heart FM Breakfast Show Team for a morning and signed Manchester United and Manchester City football shirts.

Lucky lady Kay Evans from Rhodes in Middleton won a pair of diamond earrings kindly donated by Slack and Andrews from the Christmas beauty cracker raffle which also took place.

All funds raised from this year’s event will go towards the Charity’s fundraising appeal to build a 24 hour access helipad on location at the hospital’s Central Manchester site. Currently, the hospital relies on a secondary landing site in a local park, adding precious minutes to the transfer of an incredibly ill child. An on-site landing pad will help to dramatically reduce patient transfer times by up to two thirds and in turn will help to save lives and improve patient recovery.

Sharing her story on stage as to why the helipad is so vital was Sarah Rigby whose daughter Danielle was involved in a life-threatening road traffic accident last year. 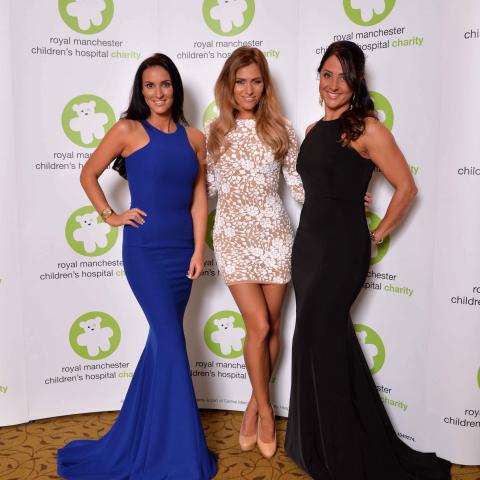