YOUNG patients became TV stars for the day when they took part in filming for CBBC.

A group of children were filmed playing with slime and chatting with YouTubers Max and Harvey when they took part in the duo’s FOMO programme.

The filming took place in summer at Royal Manchester Children’s Hospital and was organised by CBBC and our Charity.

The Charity’s Senior Community Fundraising Manager Angela Rowe said: “The children had such a good time meeting Max and Harvey and being filmed for the programme.

“Max and Harvey were so good with the children and even stayed to make sure they chatted to them all and posed for pictures afterwards.

“These children have been through so much at such a young age so I know for the families it will be a nice memory to treasure for a long time.”

The children selected to take part in the show were a mix of current patients staying on wards and past patients who are now outpatients, occasionally returning for check-ups.

All the filming took place at the hospital on Wednesday, 31st July and the programme broadcast date is Saturday, 7th September 2019 at 9.15am.

The iPlayer page for the show is available here. 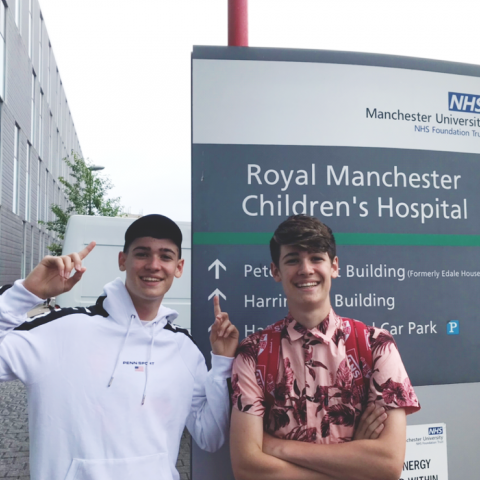