6 year old Riley Parrish from Failsworth was admitted to Royal Manchester Children’s Hospital after suffering a stroke, just before his fourth birthday.

The stroke was brought on by a brain tumour, unknown to his family at the time, which left the little boy with a form of cerebral palsy, paralysing him down one side. Riley also was unable to speak. Despite his setbacks he now loves nothing more than chatting away about his favourite team and on Sunday Riley was the official Manchester United mascot for their derby match against Manchester City.

Riley was chosen for the once in a lifetime opportunity due to him being a huge fan of United, this love of football aiding his recovery. To make the day even more special the game was almost two years to the day since Riley had his operation, his parents being told by doctors then that their son may be paralysed. Thankfully however, he has now made a fantastic recovery and proudly walked onto the pitch on Sunday afternoon alongside defender Phil Jones.

Kitted out in the latest kit, kindly provided by the club, Riley and his family also got the full Old Trafford VIP experience watching the 0-0 game from the comfort of the hospitality suite where they were also treated to a half time talk from Bryan Robson.

Riley enjoyed lining up with the players in the tunnel, before heading onto the pitch. He also managed to catch the footballers warming up beforehand, getting a shirt full of signatures from his favourite players including Wayne Rooney and Memphis Depay.

“Riley has come such a long way in the past few years, the stroke, and brain tumour took us all by surprise. The type of tumour that he had, called multiple cavernoma, means that there are more than one of the tumours but doctors at the hospital are keeping a close eye on them. He now even plays for Chadderton Park Cerebral Palsy Football Team.

Riley loves football so much and he was absolutely over the moon to be chosen to be the derby day mascot. He has been excited for weeks. On the day he was laughing and joking with the players. It was the best experience for us as a family and something we will never forget.

We would like to thank everyone involved for this amazing opportunity.  Sunday was a world away from where we were two years ago. We didn't think Riley would walk never mind walk out at Old Trafford.”

“Riley’s heart-warming story made him the perfect patient to enjoy this fantastic opportunity; we are so pleased that he really enjoyed himself. Our patients go through so much so it is always really special when they are able to do things like this.  ”

Riley was an inpatient for around 3 months, allowed home just in time for Christmas. He is still a regular visitor as he continues his rehabilitation. Mum, Gemma, says that he actually loves the hospital and is always chatting to all the staff about the latest football scores!

To help support patients like Riley visit our Get Involved page to see how you can make a difference. 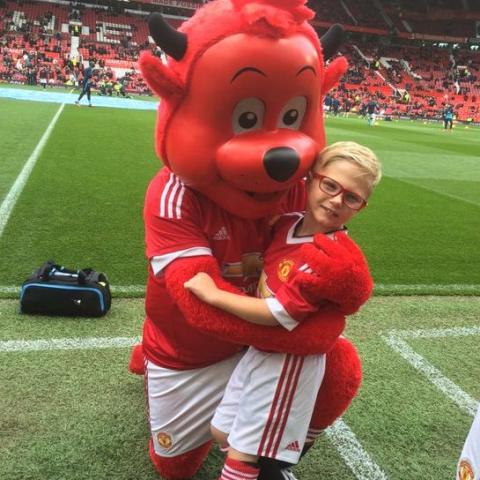