HE MAY only have just turned one, but baby Rocco has already undergone four operations…with more to come in future.

The happy baby was diagnosed with Stage 5 kidney failure caused by cystic renal dysplasia at just nine days old. Since then he’s had countless appointments at Royal Manchester Children’s Hospital, including four operations in the first nine months of his life – two related to his condition and a further two for a hernia and tongue tie.

Rocco has faced many battles in his life already, has had six stays in hospital and there is a possibility he’ll need a kidney transplant in future. But despite all this Rocco remains a delightful, smiley baby who melts hearts wherever he goes.

Dad Joe Sankey, from Wigan, said: “It all started when he was nine days old.

“We were referred to Royal Manchester Children’s Hospital and he had a scan, where they told us his kidneys were half the size they should be. He was fine at first, but then in November his weight was still really small and he couldn’t keep food in him.

“He’s been in for so many hospital appointments but he’s always a smiley baby – everyone notices it.”

The tiny tot was born weighing 5lb 4oz on 19th April 2018, a month premature. His diagnosis means he has struggled to gain weight and will soon have a fifth operation to have a gastrostomy inserted. This is a tube in his tummy which means Rocco can have nutrition sent directly to his stomach, bypassing his mouth and throat. This will allow him to have larger volumes of feed, or be fed overnight when he is asleep. It’s hoped this will help him gain weight and keep food inside him.

Once Rocco is able to gain weight and grow stronger, the next stage will be to discuss options for a kidney transplant.

Joe said: “He’s one year old now but people tell us he looks more like a three-month-old – he’s really tiny.

“We didn’t like the idea of a gastrostomy at first, but we met another mum whose child had one and she said she wished she’d had it done sooner – so that really reassured us. It was helpful to meet someone who been through something similar.”

Joe, 29, said: “Even though he’s been through a lot he never stops smiling. You would think he’d be scared of hospitals but he loves going for cuddles with all the doctors and nurses.”

Joe has been so thankful for all the help and support Rocco has received from the renal team at Royal Manchester Children’s Hospital, he’s now gearing up for a skydive with friend Sam Rimmer.

The two friends will be part of a team of Royal Manchester Children’s Hospital Charity supporters doing the jump in June.

Although places for this event are down to the last few, the charity currently has a special Easter offer on for anyone wishing to do a skydive in September.

Sarah Naismith, Director of Royal Manchester Children’s Hospital Charity, said: “We’re so grateful to Joe, Sam and all the daredevils who are braving our terrific skydive event.

“I’d encourage anyone wishing to take part in the September skydive to apply quickly – we have a special sale on and we’re expecting places to fill up fast.”

Registration is normally £50, but we're currently holding an early-bird sale where you can register for just £25 until the end of May. Click here to register for the September skydive.

Joe is also hosting a charity race night at Ince Rose Bridge Sports and Community Club on Saturday, 27th April at 7pm. There will be nine races, raffles, auctions, bingo and a pitch and toss.

The support of Royal Manchester Children’s Hospital Charity means the hospital can provide additional resources that make life easier for patients and their families who use the hospital.
The charity has three main areas of work: 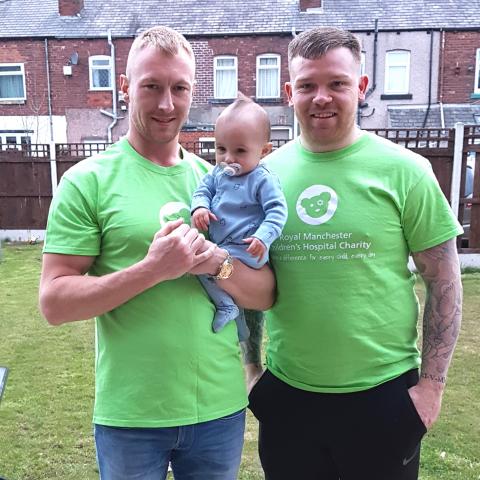