A BABY given just a 30% chance of survival and who battled more than 18 lifesaving surgeries has just uttered her first word.

The news they could lose their baby was devastating for Molly’s parents, Dan and Kimberley Corthorn. But despite the odds, they decided to continue with the pregnancy and were delighted when baby Molly said “mama” for the first time – a moment that, at some points, they thought they’d never get to see.

Their daughter and the medical teams who saved her life are the reason the Corthorn family have been fundraising for Royal Manchester Children’s Hospital Charity.

“I was in the kitchen and Kim was in the lounge with her playing the other day,” said Dan, 32. “She was on the play mat and she just came out with it and said it a few times.

“Kim shouted me and said ‘come listen to this’. It was just incredible. She is a mummy’s girl so she was destined to say ‘mama’ first.

“It was an amazing moment. Especially after we were told we might never see our baby alive.”

Baby Molly’s outlook was poor when, at a 20-week scan in the womb, doctors revealed she had congenital diaphragmatic hernia and gave her a 30% chance of surviving. Kimberley was immediately referred from her local hospital in Buxton to Saint Mary’s Hospital in Manchester. Later in the pregnancy Molly was also diagnosed with ventriculomegaly, worsening her prognosis.

The congenital diaphragmatic hernia (CDH) meant Molly’s hernia hadn’t formed completely. This allowed her intestine, bowel, liver and stomach to migrate upwards and develop in her chest, putting pressure on her lungs and heart. The ventriculomegaly meant she had a build-up of fluid on the brain. Once she was born and this fluid build-up caused pressure on her brain, this was known as hydrocephalus.

“Not many babies have both hydrocephalus and CDH, it’s quite rare to have both,” explained Dan.

“We were told not to search the internet about the disorders, but of course that’s the first thing you do and you read all the worst case scenarios.

“But we couldn’t even consider a termination – we thought a 30% chance had to be better than 0%.”

After Molly’s three diagnoses in the womb it was decided Kimberley, now 31, should be induced early. Molly was born at 37 + 3 weeks at Saint Mary’s Hospital on 21st June 2018. Straight away she was taken off to be incubated and hooked up to various machines to keep her alive.

“It wasn’t a nice experience,” said Dan. “When your child is born of course you want to cuddle them and hold them – it’s only natural.

“But we had to let her go while she was hooked up to the machines. It was 2 or 3 hours before we actually got to see her properly.

“The following evening we were told by the consultant things weren’t looking good. We were on edge waiting to be told if she was going to make it.”

Thankfully, Molly made it through the night and eventually Kimberley and Dan – who are also parents to Isla, 8, and Arlo, 3 – were able to put their hands in the incubator to touch their baby. By the time she was eight days old, it was thought Molly was strong enough for her first operation.

“They wanted to operate on her hernia, to basically bring her organs back down to where they should be,” explained Dan. “But she didn’t even get to the operating theatre, she began to crash in the anaesthetic room – it was a big step backwards.

“She then needed the maximum amount of support and help. That was horrible – we’d thought we were getting somewhere.

“On day 11 we managed to try again and they did manage to repair her hernia and put all her organs as near to where they should be as possible.”

A few weeks later, Molly was able to have the first operation on her brain at Royal Manchester Children’s Hospital and had a shunt fitted to relieve some of the pressure and drain the excess fluid away.

Since then she has had 18 more operations, all on her brain, to control the fluid build-up. She’s spent more days in hospital than she has at home – including when she was first born, her parents’ wedding, Father’s Day, Kimberley’s birthday and a long stay t from Easter weekend until the end of July. Molly also still feels the effects of her congenital diaphragmatic hernia – she has a weak chest as her lungs were unable to develop properly and often struggles come cold and flu season.

“It’s horrendous leaving her with the surgeons, you don’t numb to it, but I do suppose it becomes ‘normal’ if you can call it that,” said Kimberley.

“It is easier now we know most of the surgeons and they know her – it puts us at ease.

“We’ve been through a lot of dramas and times when we thought she wouldn’t make it, but when you consider she was only given a 30% chance of survival she’s done amazingly well.

“She’s smashed it out the park. We couldn’t be prouder. So when she said her first word it was a really special moment.”

It is possible Molly will need more operations in future and is still on lots of medication. Her development is also behind those of her peers, which is why celebrating her achievements is so important for the family. But it is possible she will lead a normal life in future, the family just have to see what happens.

Meanwhile, the Corthorns have been so moved and appreciative of all the care they’ve received at the children’s hospital, they’ve been fundraising for Royal Manchester Children’s Hospital Charity.

Last year Dan took part in the Manchester Marathon and Dan and Isla also took part in Glow in the Park – a night time 5K around Heaton Park where participants are encouraged to wear neon clothes and face paint.

In total, the family have raised more than £1,800 for Royal Manchester Children’s Hospital Charity, with plans to do more fundraising in future.

Royal Manchester Children’s Hospital Charity enables the hospital to provide additional resources that make life easier for patients and their families who use the hospital.

Our charity has three main areas of work:

Royal Manchester Children’s Hospital Charity’s Senior Events Manager, Viv Williamson, said: “Molly and her family have been through so much – including endless hours of driving each time they visit the hospital from their home in Buxton – and yet they still found time to fundraise for us.

“Molly should act as an inspiration to anyone planning a fundraising event – her determination and strength is so encouraging. It’s hearing stories like this that makes being part of the RMCH Charity family so rewarding.” 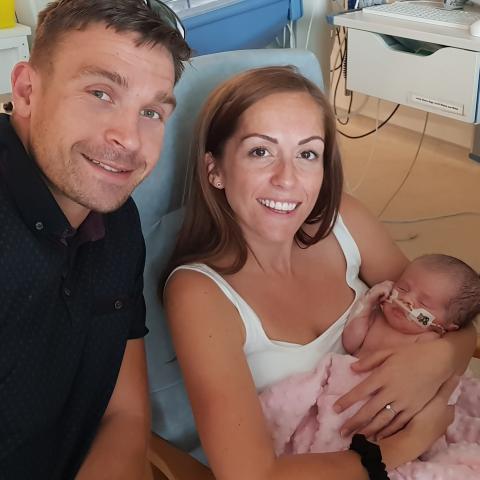