The campaign, spearheaded for the third time by renowned businessman Theo Paphitis, has raised £52,000 from 52 participating companies since last year’s launch. The famed Dragons’ Den star presented TK Components, a luxury kitchen company based in Denton and their partners in the competition, health and fitness club Bodycheck, Glossop as winner of Many Hands 2015, following an impressive pitch to judges.

The Many Hands Campaign, which was first launched in 2008, encouraged North-West businesses to support the charity by signing up to a fundraising target of £1,000 each over the course of twelve months.

The Many Hands finale saw five shortlisted companies pitching to a panel of judges with the aim of becoming champion of Many Hands 2015. The winning company showed the most initiative in developing an exciting fundraising concept; in this case it was ‘children helping children’.

TK Components’ team actually consisted of the children of owners from both companies, something never seen before at a Many Hands Campaign! The five young girls, Adarna, Damara and Santia Hazelhurst along with their friends Sophie and Lucy Campbell, persuaded their parents to let them organise a fun-run alongside a wide range of other fundraising ventures.

The other shortlisted companies were CityCo for their range of initiatives including their executive Lunch and Lecture with Gary Neville, Smith Goodfellow PR for their list of “extraordinary events”  throughout the year and Marketing Profile for their popular golf day. Also joining the nominees was Salutions Ltd for their Midsummer and Winter Galas.

The evening, which also included a Q&A session with Theo Paphitis was hosted by esteemed former BBC presenter, Andy Johnson. Andy is best known for presenting Inside Out and now uses his expertise to run his own company, Andy Johnson Media.

Money raised by this year’s campaign will support the enhancement of the hospital’s Burns Unit, which last year celebrated its 60th anniversary. Originally opened at the old Booth Hall hospital site in the 1950s before transferring to the new Royal Manchester Children’s Hospital site in 2009, the specialist Burns Unit deals with thermal injuries of all types and level of severity suffered by children from across the North-West.

Commenting on the Campaign, long-term supporter of the charity, Theo Paphitis, said:

“I would like to congratulate all businesses involved in the campaign for their efforts in exceeding the fundraising target of £50,000, a truly impressive feat. In particular, the winners demonstrated such passion and drive in raising over £6000, despite their young age. I am sure they will all make fine businesswomen in the future.

This year’s Many Hands finalists have been exemplary in developing innovative concepts to make a genuine difference to the level of funds raised for Royal Manchester Children’s Hospital. Each of the companies have displayed qualities which made them all worthy winners, demonstrating that no matter the size of a business a highly-commendable contribution can be made.”

“We are very grateful to Theo for his continued involvement in this fundraising campaign which will enable the enhancement of the hospital’s burns unit. For our young patients the unit can often be a very frightening place; the funds raised by Many Hands will be used to create calming and interactive artworks which will provide a necessary distraction from often very painful and distressing burns treatments.

Theo’s profile has inspired a variety of businesses to become involved in the campaign.  The Charity would like to thank them for their valuable contribution. Many Hands really does highlight how companies, small or large, can engage with their local community to produce long-lasting and meaningful results.” 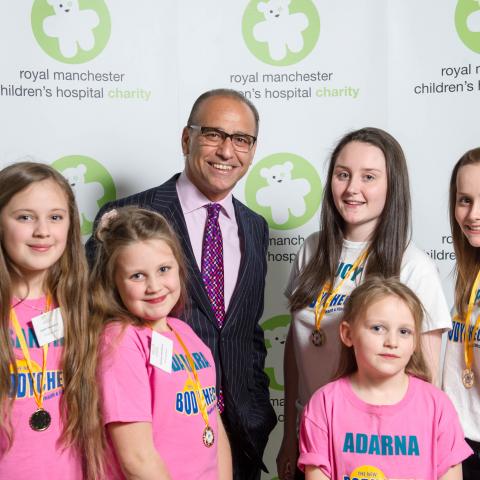