It was a Thursday morning, last September when Lucy was rushed to Royal Manchester Children’s Hospital with a life-threatening head injury. Thankfully Lucy is recovering well, but her family say if the Air Ambulance had been able to land at the hospital itself, she would have received the treatment she needed much sooner.

“We assumed that Lucy would have flown straight at the children’s hospital, but instead the helicopter had top land in a nearby park where it was met by a road ambulance. Thankfully we were lucky. Lucy is doing really well and was able to access the care she needed in time.  However, we are only too aware how different our situation could have been had she not got to hospital when she did.  The precious time that secondary transfer by road ambulance takes has the potential to be the difference between life and death or between living well and just existing.”

Once at hospital Lucy needed an MRI Scan and was moved to the Paediatric Intensive Care Unit (PICU) where her parents were told that Lucy had bruising on the brain. Her parents sat by their little girl’s side for the next three days - desperately hoping she was going to be OK and thankfully a few days later they were told that they would start to bring her out of the coma. After five days on PICU, Lucy was moved to the High Dependency Unit – a real step in the right direction. Her progress was good and just 24 hours later she was moved to a ward.

Lucy is now backing RMCH Charity’s Be Seen in Green campaign which asks people to show their support by wearing green (the charity’s colour) and making a suggested donation of £2. This year Be Seen in Green, kindly supported by Ryman, is on Friday 1st July  and is open to schools, businesses, nurseries, social groups or even just groups of friends and it is really easy to take part! All that is asked is that participants wear something green for the day. Not only will participants directly support the lives of patients through the funds raised, they will also be showing their support by donning the colours of the charity for the day.

This year the campaign will support the charity’s appeal to build a 24-hour access helipad at the hospital’s central Manchester site. Launched last September, the Helipad Appeal will allow the hospital Trust to save many more lives and increase the chances of a full or improved level of recovery in a great many seriously ill or injured patients. By taking part in Be Seen in Green participants will raise valuable funds towards the last push needed to reach the Helipad’s £3.9million target.

“I can’t tell you how great it felt to bring our daughter home, to feel like you are returning to normal life. I will forever be grateful to the staff at Royal Manchester Children’s Hospital who saved our daughters life, and that is why we will do anything we can to support the hospital.”

“Lucy is a very brave little girl and we are so pleased that she is supporting our Be Seen in Green Campaign. Her story shows that you never know what is round the corner, and when you might need urgent medical attention, which is why our appeal for an on-site Helipad is just so important. We’re lucky that we’ve had so much support for our Helipad Appeal from people across the North West, and we hope our Be Seen in Green day will raise lots of money towards the last push needed to reach our £3.9million target.” 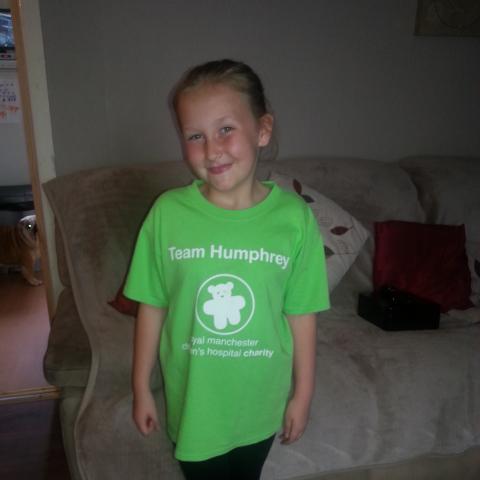