Little Iris to Light up Heaton Park for Charity

Seven-month-old Iris Julia Travis, from Swinton, is set to be one of the youngest fundraisers at Royal Manchester Children’s Hospital Charity’s sponsored Lantern Walk when she takes part in the event with her family to say thank you to the hospital for her life-saving treatment.

Iris was diagnosed with spina bifida, a birth defect where the baby’s spine and spinal cord don't develop properly, causing a gap in the spine. The news was given to the Travis family when mum, Jennifer and Dad, Andrew went for Jennifer’s 20 weeks scan. The couple were told that their baby would need surgery days after she was born and Jennifer was transferred to St. Mary’s Hospital for all of her following ante-natal care.

Iris was born on 4th April 2018 and was transferred straight to the hospital’s Neonatal Intensive Care Unit (NICU). At just two days old, Iris underwent an 11-hour back closure operation to ensure her spinal cord was placed back within her spine and was fitted with a shunt to drain any excess fluid from her brain.

Jennifer comments: “As parents it was terrifying to have to kiss goodbye to our little girl and see her head to surgery at just two days old, but we knew she was in the best possible hands. Thankfully the surgery was a success and Iris recovered really well. Within 2 weeks she was well enough to leave NICU and she was transferred to Ward 78 at Royal Manchester Children’s Hospital, which soon became a second home for us. All the staff on the ward were just amazing, we couldn’t fault the care we received.”

Iris was discharged from hospital on 17th April but was only home for one night before she had to return to the ward - her shunt had become blocked, causing her abdomen to start leaking CS fluid. This resulted in further surgery for a shunt revision. Two weeks of IV antibiotics later and Iris was discharged again only for history to repeat itself - Iris began leaking CS fluid from her back closure site and was soon down in theatre for a second shunt revision.

At this juncture, Iris’ neurosurgeon decided to fit her with a programmable shunt to try to avoid as many trips to theatre as possible and just before she was due to be discharged for the third time, it proved to be the right decision. Iris began leaking CS fluid from her shunt site on her head and a relatively simple, non-invasive procedure to change the flow of the shunt proved successful.

Jennifer adds “Since Iris had the programmable shunt fitted she’s gone from strength to strength. She can hold her head up herself, is starting to learn to sit up and is a happy content baby, laughing away and moving her legs around. Every three to four weeks, Iris is visited by her physiotherapist and occupational therapist and we have been practicing exercises with her up to 10 times a day to give her the best chance possible of being able to reach her milestones. We’re just so thankful to everyone at the hospital who has helped give Iris the best possible start in life. That’s why we have signed up for the hospital charity’s Lantern Walk, as our way of saying thanks.”

Jennifer, Andrew, Iris, her siblings Daniel, Ella and Maggie and her Grandparents will be taking part in the 2km sponsored walk on Saturday 17th November at Heaton Park in Manchester to help raise funds for Ward 78 at Royal Manchester Children’s Hospital. So far Iris has raised over £700 for the ward she has been treated on and the amount is still rising.

Angela Rowe, Senior Community Fundraising Manager at Royal Manchester Children’s Hospital Charity commented: “We are delighted that little Iris will be joining us at our Lantern Walk to fundraise for Ward 78 at our hospital. Support from our patients and their families means so much to the charity; helping us to make the hospital as welcoming and inviting to the patients we treat as possible. If any families would like to walk alongside our brave patients, there’s still time to sign up and join us to take on the sponsored walk and raise vital funds to make a difference to children, like Iris, in our hospital.” 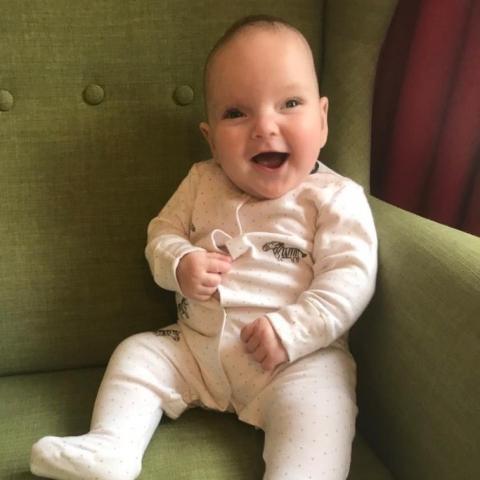