Little Joseph Hibbert from Cheadle Hulme isn’t just your average active four year old, he is a four year old who is planning on running a mammoth 5 kilometres before his next birthday, all in support of Royal Manchester Children’s Hospital Charity.

In 2013 Joseph’s mum, Shelly Hibbert, took part in the Great North Run. Joseph wanted to take part with her, however she told him he would have to wait until he was a little bit older and then he could take part in his very own race. Last year Joseph eventually followed in his mum’s footsteps and completed his first ever Manchester Mini Run.

However, this year Joseph wants to go even further, so on 19th April, along with his parents, he travelled to Edinburgh to complete the first of three Mini Runs, totalling 5km overall.

On Sunday 3rd May Joseph will be hitting Broad Street in Birmingham city centre to complete another 1.5 km. He will finish off in Manchester at the Morrison’s Mini Run in Heaton Park on 9th May, where he first caught the running bug last year.

Last year Joseph raised an impressive £600 in one week and this year he has already smashed his target raising over £1,700 so far!

“Joseph was really moved by the story of Charlie Whalley, the little boy on the Charity’s video who had sustained terrible burns to his body. Joseph really wanted to help patients like Charlie, wanting them to have a reason to smile. He worked so hard asking everyone he knows for sponsorship.

We were amazed when he said he said he wanted to do even more this year, 5 kilometres before his 5th birthday at the end of May, which is quite a challenge for a little boy! Words cannot describe how proud we are of him. He’s so excited about his mini challenge already; he has been telling all of the teachers at his school, no one can believe that this is all his idea.”

“We were thrilled when we heard about the hard work of this remarkable little boy, we have never known any other child to complete such a challenge. We will be there to see Joseph across his third and final finish line in Manchester on the 9th May and we can’t wait to congratulate him!

This year we are the nominated charity for the Manchester Mini and Junior Run and we are expecting to see more children than ever before taking to Heaton Park to raise money for the hospital which is the largest single-site children’s hospital in the country.”

The Mini Run is 2km long and is suitable for children 3-8 years old. The Junior Run is the further distance of 2 miles and for children 9-15 years old. 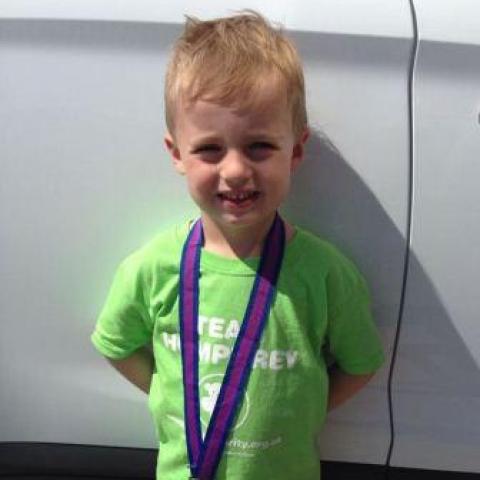