Ice Hockey Team Cooking up a 'Storm' for Charity!

Your Go Goodwins Manchester Storm has launched a new charity cookbook to help poorly children in hospital which is now available for fans to purchase, with all profits going towards Royal Manchester Children’s Hospital Charity.

The new cookbook features favourite recipes from all of the Storm’s players and coaching staff, ranging from Stuffed Pork Loin and Chicken and Chorizo Orzo to a Cookies N’ Cream Cheesecake.

The book is the brain child of the player’s Girlfriends & Wives, spearheaded by Emily O’Neill, girlfriend of Defence player Nate Fleming, and Lauren Pitt, wife of Forward Scott Pitt. Fans can purchase the recipe book at the Silver Blades Ice Rink in Altrincham up until the end of the match against the Cardiff Devils on Saturday the 24th of February, or online from the Storm Sports Store.

The clubs Marketing and Community Manager, Simon Bailey, is pleased to help another local charity;

“This year, the Storm has been more heavily involved in the community than ever before. We’ve of course held our famous #PinktheRink night for The Christie, a teddy bear toss for Key103’s #MissionChristmas, on Valentine’ s Day we hosted a #BloodDonation night in support of NHS Blood & Transplant.  Now we’re further expanding on the connection between the club & Royal Manchester Children’s Hospital following the players visit prior to Christmas to hand out goodies for the children, and with this cookbook.

“The girlfriends, partners, and wives of the players have really done a fantastic job in organising and growing this link and all credit must be given to them for pulling it off!”

“This is a brilliant fundraising idea and we are very grateful to everyone at Storm for choosing to support our hospital in this way. The money raised from the cookbook will make a big difference to the poorly children treated at our hospital, so we hope as many people as possible will take the opportunity to add a fantastic cookbook to their collection whilst raising valuable funds for our charity.” 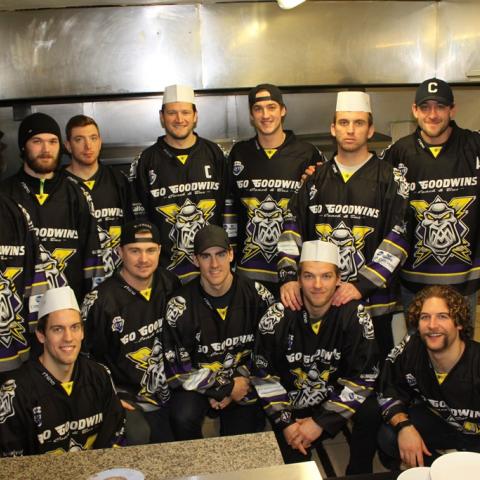