The fundraising efforts were inspired by a two-year old’s brave journey to fight cancer and the heroic NHS staff members who supported him. Imran Badat, an EG Group colleague, said his life was completely torn apart last year when his son Zakariyya was diagnosed with leukaemia, and that he could not thank Royal Manchester Children’s Hospital enough for the care and treatment it delivered.

Over a six-month period, Zakariyya received the necessary medical care and intensive treatments required to manage his condition, and is now thankfully in remission under long term “maintenance care”.

Following a discussion with EG Group’s leadership team, the business agreed to take part in fundraising activities that were generously supported by members of the public who also donated.

The funds raised will enable Royal Manchester Children’s Hospital Charity to enhance cubicles and facilities on the Bone Marrow Transplant Unit. Children who receive treatment on the unit often stay for a six to eight week period, however, some stays can last up to six months. During the transplant period children are nursed in isolation, which means they cannot leave their cubicle and are limited in the number of visitors who can see them.

The unit currently has 11 cubicles and 10 of them are painted with neutral colours. Children often display artwork on the wall to brighten the room and decorate the cubicle windows. With the funds raised by EG Group and the local community, some of the cubicles will boast more fun and child-friendly décor, significantly improving the environment and overall inpatient experience.

Mohsin Issa CBE and Zuber Issa CBE, co-founders and co-CEOs, EG Group, said: “In such situations the upheaval caused is immeasurable: the affected children and their families go through a very traumatic and unsettling period. The personal support and medical assistance extended by Royal Manchester Children’s Hospital is truly humbling and commendable. Through our contribution, EG Group want to make sure that the time spent in hospital is a more pleasant and welcoming experience. We would like to thank Royal Manchester Children’s Hospital Charity for the opportunity to assist in such a worthy cause.”

Rachel Laycock, Senior Corporate Fundraising Manager for Royal Manchester Children’s Hospital Charity, said: “The entire EG Group staff have shown tonnes of enthusiasm in their fundraising and it’s been a pleasure receiving their updates and seeing their progress. It’s encouraging to work with such a passionate team and it’s very obvious that Zakariyya’s cancer battle really resonated with EG Group employees and the local community. We are all are excited to see the cubicles being given the makeover that the children deserve.” 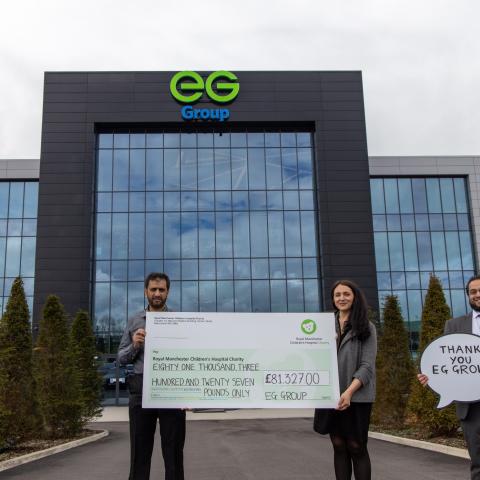