The family of five-year-old Pixie-Belle Sykes, from Ashton-under-lyne, are fundraising for Royal Manchester Children’s Hospital where Pixie-Belle is undergoing treatment for a rare type of brain tumour called Pilocytic Astrocytoma.

Pixie-Belle’s parents, Andy and Katie, took their daughter for an eye test in February this year after noticing that her right eye was looking slightly to one side. After trialling an eye-patch to no success, Pixie-Belle was referred to Royal Manchester Children’s Hospital for an emergency eye appointment and MRI scan.

Devastatingly, the MRI scan uncovered a brain tumour behind Pixie-Belle’s eye and the following week Pixie underwent a biopsy, which thankfully revealed that the tumour was non-malignant. Young Pixie-Belle is currently on week 12 of an 84 week course of chemotherapy to shrink the tumour.

Pixie-Belle’s dad Andy said: “We initially thought it was just a case of weak eye muscle which was affecting Pixie’s eye; never for one second did we think it could be a brain tumour. Up until her diagnosis, Pixie had always been completely fit and healthy, a really happy young girl so we were stunned when we were told she had a brain tumour.

“The tumour is located behind her right eye and is pressing on her optic nerve which has already caused partial loss of sight in that eye. Pixie’s consultant wanted to preserve her vision as a priority and we were advised that the best course of treatment would be chemotherapy which started on 10th July. Pixie-Belle has been very up and down as the chemo is starting to take its toll. In the fourth week it floored her; she couldn’t eat, was sick lots and started losing some of her hair. There’s nothing worse than seeing your daughter go through this, and my focus has to remain strong for her and the family.”

By chance, Andy had already signed up to take on the Manchester Half Marathon on 14th October to fundraise for Royal Manchester Children’s Hospital Charity, before his daughter was admitted under its care. Since his daughter’s diagnosis, Andy is determined to fundraise for the hospital’s recently launched iMRI Scanner Appeal, to build a new intra-operative MRI (iMRI) scanning suite that will revolutionise brain surgery at Royal Manchester Children’s Hospital.

Andy comments: “I signed up to fundraise for the hospital before we had any idea about Pixie-Belle’s condition. I tend not to believe in fate but it feels like fate now that we are under their care following Pixie-Belle’s diagnosis. The Charity’s latest Appeal is to help children like Pixie-Belle who have been diagnosed with brain tumours, so that’s what I’m passionate about fundraising for. Everyone at the hospital has been amazing and I can’t thank them enough for their care and expertise.”

Since Pixie-Belle’s diagnosis, support from family, friends and even strangers has come flooding in, with Andy’s fundraising page total currently standing at over £3,000.

Andy adds: “Supporting the hospital charity is my way of doing something to help. As well as the half marathon, I have now signed up for the Manchester Marathon in April 2019 and the company I work for, Freshfields Bruckhaus Deringer, has selected Royal Manchester Children’s Hospital as their charity of the year, and as a family we’ve signed up to volunteer at up-coming charity events. We’ve got a long road ahead of us with Pixie-Belle’s treatment, but getting involved in the charity has given me something to focus on.”

Viv Williamson, Events Manager at Royal Manchester Children’s Hospital Charity commented: “We can’t thank Andy enough for everything he is doing to support our charity, especially at such a challenging time for his family. He’s already raised an incredible amount from the half marathon which will make a valuable contribution towards our iMRI Scanner Appeal. We wish Pixie-Belle all the best with her recovery and look forward to seeing Andy at the half marathon, and cheering him along on the day!”

To support Andy in his fundraising, please visit: www.justgiving.com/fundraising/andy-sykes-aidenseek 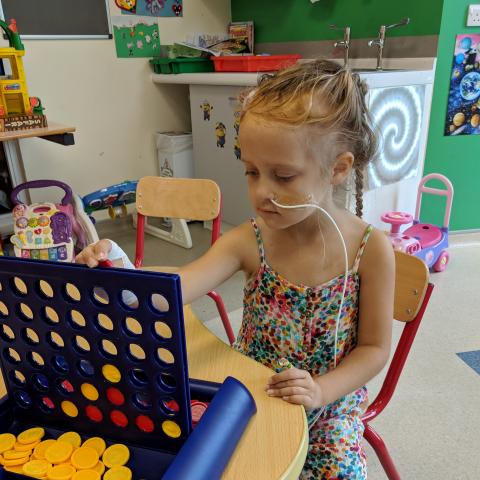