Coronation Street stars Tina O'Brien and Faye Brookes are used to being on one of the most famous streets in Manchester and this May the stars of Coronation Street are putting on their running shoes and hitting the streets of Manchester.

Tina O’Brien and Faye Brookes, both regulars in ITV’s long-running soap Coronation Street, will be putting their best foot forward at the Great Manchester Run as part of Team Humphrey.

The Manchester-born actresses will be joining 2,000 Team Humphrey fundraisers on the day at Europe's biggest 10K running event, to help raise funds to support the charity’s Helipad Appeal.

Commenting on the run, Tina says: “I’m delighted to be taking on the run with Faye in support of Royal Manchester Children’s Hospital Charity. Being born and bred in Manchester, I know the exceptional work the Children’s Hospital does and I’m proud to have supported the charity at a number of fundraising events over the years. We are so lucky to have such a fantastic facility on our doorstep and it’s going to be great fun taking on this prestigious run for such a worthy charity.”

All funds raised from the Great Manchester Run will go towards the Charity’s fundraising appeal to build a 24 hour access helipad on location at the hospital’s Central Manchester site. Currently, the hospital relies on a secondary landing site in a local park, adding precious minutes to the transfer of an incredibly ill child. An on-site landing pad will help to dramatically reduce patient transfer times by up to two thirds and in turn will help to save lives and improve patient recovery.

Faye, who joined the Coronation Street Cast last year as Kate Connor says: “This is my first time running the Great Manchester Run and I’m really excited to take on the challenge in support of Royal Manchester Children’s Hospital.  It’s such a fantastic charity to support and I jumped at the chance as the hospital was unbelievable when they looked after my little brother.  I’ve no doubt the knowledge my fundraising is going towards such a great cause will spur me on throughout the run!”

This year the Great Manchester Run takes place on Sunday 22nd May with Royal Manchester Children’s Hospital Charity once again being the nominated charity for this year. The 10 kilometre run is open to those aged 15 years and over. Those too young for the main event can also put on their running shoes to take part in the Mini and Junior Run at Event City on Saturday 21st May.

To join #TeamHumphrey for the 2016 Great Manchester Run click here. 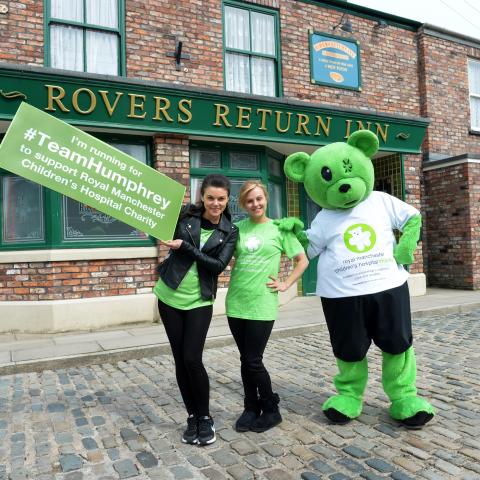