Royal Manchester Children’s Hospital Charity is delighted to announce their new charity partnership with local brewer, Hydes. Funds raised by their 30 pubs and head office in Manchester will go towards supporting excellence in treatment, research and care at the largest single-site children’s hospital in the country.

The partnership is to span a number of years as Hydes and pubs from Chester to Bury will all have the charity’s vibrant green collection tins on the bar for patrons to donate any spare change. As well as this the company have plenty of exciting fundraising ventures lined up which will be revealed in the coming months as each pub is  encouraged to organised their own events.

One of which is the launch of their new children’s menu where 50p off each meal will go to the charity in the month of September.

Hydes recently visited Royal Manchester Children’s Hospital to see for themselves how the hospital, and its poorly patients, will benefit from their fundraising. On their tour the group of 5 representatives from the company, which employs 530 staff, visited the recently redeveloped radiology department, an example of a space enhanced thanks to charitable funds. Once clinical and stark looking, the department now boasts an impressive space theme, each of the rooms decorated to look like a different planet.

The group also caught the sun on the hospital’s purpose-built roof garden which benefits patients letting play outdoors and act as children, whilst still safely in the hospital setting.

“We are very excited about our new partnership with Royal Manchester Children’s Hospital Charity.  We have been extremely impressed with the work the charity undertakes and know our managers will unite behind this very worthy cause.  We have a great tradition in Hydes of raising money for local charities and the reach of the hospital means that many of our customers too, will have benefited from the charity’s work.”

“Royal Manchester Children’s Hospital Charity is proud to have secured the long-term support of Hydes Brewery; with a deep-rooted history in Manchester, we serve the same community and share the same values of “striving for excellence”. We are excited to share in their success and wish the Hydes team all the best in their fundraising efforts” 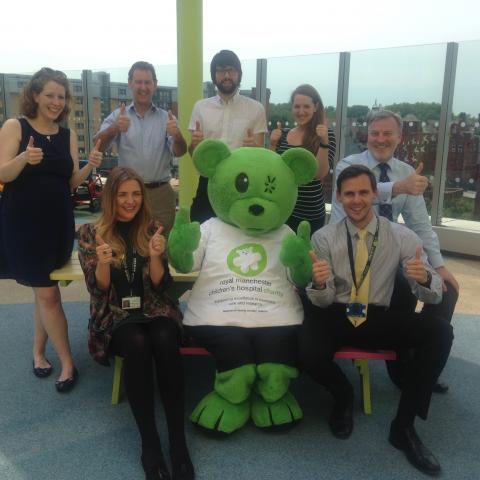