A CELEBRITY quiz packed full of famous faces will be part of the celebrations to mark the 72nd Birthday of the NHS.

All the funds raised will be divided between our family of hospitals in Manchester University NHS Foundation Trust, which includes the children's hospital.

The date is a particularly special night for everyone in the Greater Manchester area as Trafford General Hospital is the birthplace of the NHS – Aneurin Bevan visited the hospital (then known as Park Hospital) to inaugurate the NHS in 1948, symbolising the hospital as the first to transfer into the new National Health Service.

Hosted by famed quizmaster Gavin Inskip, the “Celebrity Quiz: Celebrating 72 years of our NHS” will include questions from Cold Feet actor and our Charity patron John Thomson, Hollyoaks stars Ashley Taylor Dawson and Sarah Jayne Dunn, X-Factor: Celebrity contestants Max and Harvey, singer Max George, actors Sam Kane and David Neilson and presenter Linda Lusardi. There will also be an appearance from the Mayor of Manchester himself, Andy Burnham.

John Thomson, a long-time patron of our Charity, said: “It’s great to have been asked to support the Charity I’m so proud to be a patron of.

“I love a quiz myself – I’ve done a few of the celebrity versions of TV quizzes like Pointless and done it to raise money for charity. So it’s fitting I was asked to be part of this one.

“It’ll be something really fun to do together and raise a bit of money for a wonderful cause. It’s only £5 too!”

There will also be questions from Hollyoaks stars Ashley and Sarah, also known as husband and wife characters Darren and Mandy.

Sarah knows all too well the importance of the Charity’s work, after her son Stanley was treated at Royal Manchester Children’s Hospital last year. She said: “The children’s hospital and the NHS as a whole is just fantastic. So it’s nice to be able to support something and be able to give something back when they’ve done so much for my family and I.

“And I’m a local girl too – so supporting a North West organisation and charity is a real privilege.

“I want to make a real song and dance about this Charity and I hope lots of people take part in the quiz!”

Ashley, who has also been a patron of the children’s hospital for a number of years said: “When you see the incredible work our hospitals do, it’s really humbling.

“You forget how lucky you are – I can’t imagine how stressful it must be for a family having a loved one in hospital. When you have your health and happiness, you have everything.

“In the past, when I’ve met some of the parents at the children’s hospital, I’ve started to realise just how hard it must be for them and how important it is that we raise money and do our bit to try and help.

“We’re very lucky to have our NHS so hopefully we will get lots of people to sign up for a good cause.”

Gavin Inskip, the event’s quizmaster, who also does voiceovers for the likes of the Great British Bake Off and the Coco Pops monkey, said: “I’m really excited to be hosting this quiz for Manchester Foundation Trust Charity, it's going to be such a great night.

“It's not like a Zoom quiz with your Auntie Marge! It's a proper Quiz Show in a studio, like a TV programme with celeb rounds, prizes and just a lot of fun. I hope as many people can sign up and join us and we raise a whole load of money for the Charity.”

Money raised from the event will help fund the Charity’s vital work in supporting projects which benefit patients and their families. It does this by focussing fundraising efforts on three key areas: treatment, research and care.

Sarah Naismith, Director of Manchester Foundation Trust Charity, said: “The 72nd birthday of the NHS is incredibly special to us – not only  is it a chance to fundraise for the biggest and greatest NHS Trust in the country, but within our family of 10 hospitals we have Trafford General Hospital which is home to the birthplace of our beloved NHS.

“We want this quiz to be a special night for everyone. There has been a lot of love and support for the NHS over the years, but particularly now during these challenging times.

“This will be a fantastic way to celebrate everything the NHS does, while also raising some much-needed money and having fun with family and friends.

“It’ll be a great night you don’t want to miss!”

Alongside the birthday quiz, the Charity will be carrying on the NHS birthday celebrations throughout July, encouraging fundraisers to do an activity and raise some money around the theme of the number 72 or raising £72. Keep an eye on our websites and social media for further details! 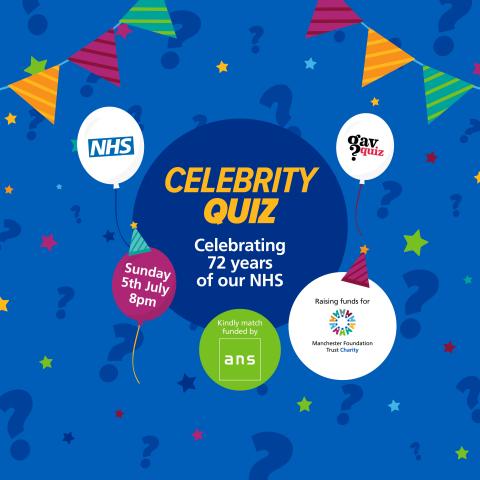