Despite having run the London Marathon in 2010 dad of three Alex is a newcomer to the Great Manchester Run, and is looking forward to taking to the streets of the city he now calls home. Cardiff-born Alex is now based in the north after becoming a regular face on children’s BBC TV channel, Cbeebies.

Alex decided to sign up to the Great Manchester Run after being asked by his good friend, Clint Boon, who this year is captaining his very own Boon Army of runners. In April 2012 Clint’s daughter, Luna Bliss, sadly lost her life after 34 days. Since then the Boon family, along with friends and supporters, have raised over £37,000 for the Saint Mary’s Neonatal Intensive Care Unit where Luna was cared for. Saint Mary’s Hospital Charity is the sister charity of RMCH with both hospitals sitting next door to each other.

Clint will be overseeing the army for both charities which will be made up of celebrity runners and musicians, as well as members of the public who wish to sign up for the Great Manchester Run Boon Army.

The Great Manchester Run this year takes place on Sunday 10th May with RMCH Charity again being the nominated charity for this year. The 10 kilometre run is open those to 15 and over. Those too young for the main event can also put on their running shoes to take part in the Mini and Junior Run at Heaton Park on Saturday 9th May.

Commenting on the run Alex says:

“I am in a fortunate position where I can encourage people of all ages to get involved whilst raising money for such a worthwhile charity. I recently visited Royal Manchester Children’s Hospital to read to patients as part of World Book Day. I was amazed by their spirit despite the challenges that many of them face on a daily basis. I encourage the whole family to enjoy a what is a weekend to remember.”

“We are thrilled to have Alex as part of the GMR Boon Army, he is known by millions of families across the country and we are proud that he has chosen to run for RMCH Charity. The Weekend Festival of Running is a chance for the whole family to get involved in raising valuable funds for the largest single-site children’s hospital in the country.” 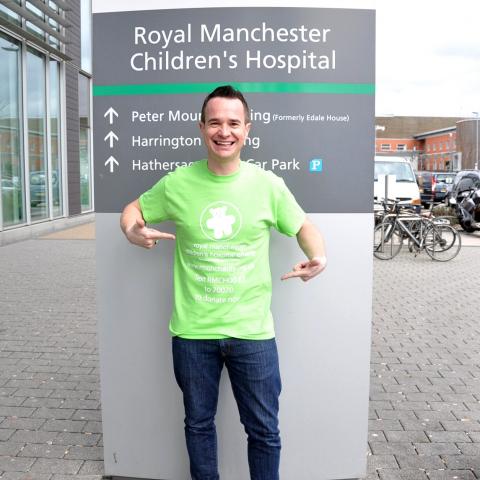