THE family of a Manchester Arena Attack survivor will be uniting to run Great Manchester Run 10K on the fifth anniversary of the tragedy.

Freya Lewis was just three metres away from the terrorist who detonated the bomb at an Ariana Grande concert on the night of 22nd May 2017. Sadly her best friend Nell Jones died in the blast along with 21 other concert goers. Freya suffered 29 injuries, was in a coma, and was wheelchair-bound for three months. Freya with her friend Nell, who sadly died in the attack

But just 12 months later she was on her feet, running the Junior Great Manchester Run for Royal Manchester Children’s Hospital Charity. This year she is doing the adult 10K for the same Charity and will be joined by her closest family and friends.

This year’s event coincides with the anniversary of the attack and will be held on Sunday, 22nd May in Manchester city centre.

“It doesn’t feel like five years ago,” said Freya. “In some ways that feels like another life but I think on the day of the run it will really hit home that it’s the anniversary.

“I always get nervous around that time of year and of course it’s on my mind, but I think it’s nice this year we will be doing something celebratory on the anniversary – raising lots of money for Royal Manchester Children’s Hospital Charity as a ‘thank you’ to all the people who saved my life.” Freya is now in her first year studying acting and performance at LMA in Stratford and says explaining what happened to her when meeting someone new is still a strange experience.

Freya said: “When I started university in September I was thinking ‘how do I bring it up?’

“My friends and I had been in touch on social media before we arrived so they had a chance to look me up online. Most of them knew already when we met but some people don’t know. It was nice to get a fresh start and be ‘just Freya’ rather than ‘Freya from the Arena Attack’.

“It’s not that I avoid talking about it. I think it’s important to talk about it. But it’s just one piece of who I am.”

Freya and her friends have been putting in some training runs and although excited for the event, Freya admits the group probably won’t stick together for the entire circuit.

She said: “I’ve been going for runs but I’m definitely not fast, so I might run a bit and walk a bit and keep doing that. If it wasn’t Manchester I wouldn’t be doing it, but I love my home city and the Charity we’re running for.

“Running has always been quite painful for my back so I just need to see how things go on the day.” Laughing, she added: “My dad will probably shoot off and leave us behind – he’s much faster than all of us.” Freya with Charity Patron Samia Longchambon at the 2018 event

Freya first did the Junior Great Manchester Run in 2018, then in 2019 she ran the 10K adult circuit and was part of the group of green T-shirts out in the crowd celebrating the 10th Birthday of Royal Manchester Children’s Hospital being at its Oxford Road home. The 2020 event was made virtual and dad Nick ran the 2021 event solo, so this will be Freya’s third time running for Royal Manchester Children’s Hospital Charity.

“I was actually discharged from the children’s hospital in December 2021,” said Freya. “I had my last ever back X-ray and it was a real mix of emotions.

“It’s great I can finally say I am completely healthy but it’s so sad I won’t be seeing everyone at the hospital. It’s felt like my second home – everyone in the Charity Team and all the medical staff are like family. It’s strange to think I won’t be treated there anymore but they can’t get rid of me! I’ll still be staying in touch and raising money for the Charity.”

Since her time in hospital, Freya has penned a book, “What Makes Us Stronger”, which will be coming out in paperback in May. She has also won numerous awards including an NHS Heroes Award in 2018 and was named as one of the UK’s most inspirational females by The Sun on International Women’s Day 2020.

Freya’s dad Nick Lewis said: “For the rest of our lives we will always do whatever we can for the children’s hospital. It sounds strange if you’ve never been there, but we really miss it. It’s an incredibly special place full of incredible people.

“This year’s run will be very poignant with it being on the anniversary. Every year when I set off running I feel the emotions. I’ll probably be quite wobbly but it’s nice we will all be together as a group. Seeing all the green T-shirts for Royal Manchester Children’s Hospital Charity always gets me.”

The family, who live in Holmes Chapel, have collectively raised £65,279.25 over the years, supported by friends, Freya’s school and the proceeds from her book launch. They hope this year’s 10K will help them to achieve a further £1,000.

Angela Rowe, Senior Community Fundraising Manager for Royal Manchester Children’s Hospital Charity, said: “Freya truly is an inspirational and amazing young woman. I feel very privileged to know her and her family and hear how well Freya is doing at university.

“The Lewis Family should all be so proud of their amazing fundraising. This money really will make an incredible difference to the treatment, research and care projects we fund at the children’s hospital.”

To sponsor Freya and her family visit their JustGiving Page. To find out about running the Great Manchester Run 10K or other events for Royal Manchester Children’s Hospital Charity visit our GMR 10K page. 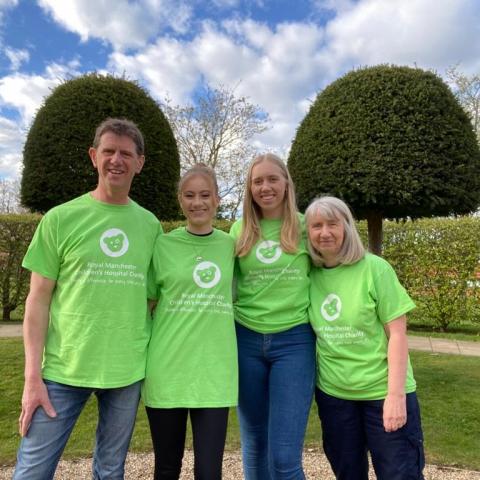