We've teamed up with North West Eatery Archie's as a beneficiary of their new Archie's Foundation.

Archie’s, which is an American-inspired burger and shakes restaurant located on Manchester’s Oxford Road and Liverpool’s Ranelagh Street, has appointed Coronation Street star Ryan Thomas as an ambassador and has set up the initiative in a bid to give back to the local community.

Director of Archie’s Imran Rafiq said: “The idea of The Archie’s Foundation is to act as the brand’s official charity scheme, which provides combined fundraising activity to support local causes. As a long-time friend of Archie’s, it’s great to have Ryan on-board as our charity ambassador.

“To kick-start the fundraising we have decided to support Royal Manchester Children’s Hospital Charity in its current ‘Many Hands’ Campaign. In doing so, we will work alongside other local business to help raise vital funds for a much needed helipad. As a father myself, I certainly appreciate the outstanding work that the hospital does on a daily basis, so it felt only natural to help out.”

As part of the initial fundraising activity, a novel 'Create-a-Shake’ competition headed by patron Ryan, will enable young patients to invent their very own milkshake, whereby the winning blend will be sold in all three Archie’s stores. £1.50 from each shake will go directly to the charity.

Joel Oxberry, Corporate Fundraising Manager for Royal Manchester Children’s Hospital Charity said: “We are thrilled to have enlisted the help of The Archie’s Foundation to support our ‘Many Hands’ Campaign. As part of the combined efforts from businesses across the North West, we hope to prove the saying true in that ‘many hands make light work’ and work together to continue to improve the facilities of our wonderful hospital.

“As Royal Manchester Children’s Hospital is the largest single site paediatric hospital in the country, it treats children and young adults stretching as far as Cumbria down to Stoke-on-Trent. With that in mind, the installation of a helipad is essential to allow the speedy aid of those who are traveling from a distance.” 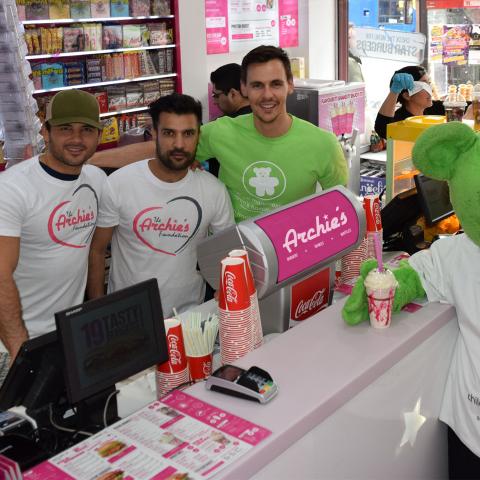