If you need a reason for joining the Simplyhealth Great Manchester Run 10K and fundraising for Royal Manchester Children's Hospital Charity, we can't think of anything better than our patients. Their inspiring stories and messages of determination and hope are what spur people on to do amazing things.

Take Andy Sykes. He is inspired by his six-year-old daughter who has a rare brain tumour. Sadly she's had an allergic reaction to her medicine, which her family hope won't delay her already substanstial treatment plan.

Pixie-Belle Sykes began treatment for her brain tumour at Royal Manchester Children’s Hospital in July last year – and was told it would entail 84 weeks of regular chemotherapy.

But her family now face a setback, after being told Pixie-Belle had suffered an allergic reaction to the medicine and would have to start again on a different treatment plan.

Pixie-Belle’s dad Andy said: “We were on week 21 just before Christmas when she had a reaction to the drugs. She had to stop the plan she was on and her doctors had to come up with another treatment.

“She was 25% of the way through her treatment when this happened and only had 63 weeks left to go. Although the tumour hadn’t grown, it hadn’t shrunk either. It has disappointing, but we had to keep telling ourselves ‘well at least it hasn’t grown’.

“Now we have to wait and see whether the new treatment means starting again, or whether it can be a continuation of the old treatment. It basically means she might finish in December 2019, or it might be prolonged until August 2020.”

Pixie-Belle, who lives in Ashton-under-Lyne, has already had two major brain operations, more than 10 MRI scans and countless injections and hospital appointments. She’s also had hair loss and weight loss – side effects of the treatments.

Andy said: “Sometimes it has been really hard. In the earlier days she would cry whenever they had to put the needle in for the chemotherapy, but she’s getting better now and rolls up her sleeve ready and says ‘watch this Daddy’.

“It’s heart-breaking for us to see. But she’s so brave.”

Last year Pixie-Belle was diagnosed with pilocytic astrocytoma, after her parents noticed something wrong with one of her eyes. The non-cancerous tumour is putting pressure on her optic nerve and has caused Pixie-Belle partial sight lost. Doctors at Royal Manchester Children’s Hospital hope the regular chemotherapy treatment will shrink the tumour and prevent her eye sight from getting worse.

It’s these thoughts about his daughter’s care that are spurring on Andy for an epic month of fundraising for Royal Manchester Children’s Hospital Charity’s iMRI Appeal.

The “superdad” will be taking on not one, but two marathons, as well as a 10K to finish things off. This would be a massive achievement for anyone, but Andy only started running last year.

He said: “I did a half-marathon in October but after that I realised I still wanted to do more fundraising.

“I feel like I’m really ‘on it’ now – as a family we want to do whatever we can to help.

“Pixie-Belle has had two brain operations and will more than likely need more in future. So anything we can do to help, we will.”

Andy is taking on the Manchester Marathon and London Marathon in April. He’ll then take part in the Simplyhealth Great Manchester Run 10K in May. For the 10K, Andy will be joined by 22 friends and family, including his wife Katie, who have dubbed themselves “Pixie’s Belles”. His target for the three events is £2,500 but for his overall fundraising target he has higher hopes.

“It’s a big amount of money, but I’d love to say that our family and friends helped with 1% of such a big sum of money.”

Andy and Pixie-Belle feature in Royal Manchester Children’s Hospital Charity’s new video. The video opens with Pixie-Belle drawing a picture of her ideal superhero, which morphs into dad Andy.

Sarah Naismith, Director of Royal Manchester Children’s Hospital Charity, said: “One marathon is a huge undertaking for anyone, so the fact Andy is doing two marathons and a 10K is just incredible.

“We’re so lucky to have passionate fundraisers like Andy to support us. We wish him, and all the Pixie’s Belles, the best of luck with training.”

To sponsor Andy visit his JustGiving Page or click here to watch the fundraising video.

Already signed up to GMR 10K? Register to fundraise for us.

Not signed up yet? Register for a place here. 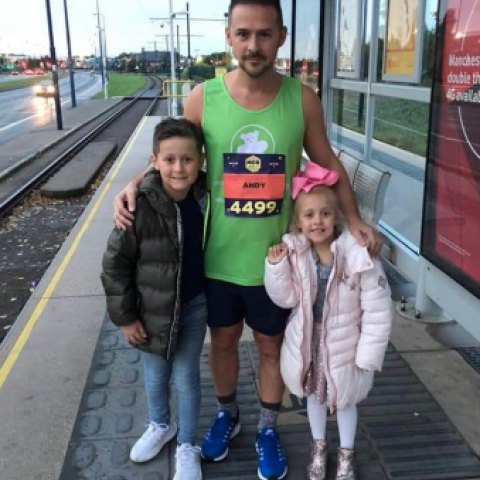