Amazon employeed and volunteers in Manchester have joined forces with colleagues in Warrington and Bolton and donated £3,000 to Royal Manchester Children’s Hospital Charity as part of the company’s global Amazon Goes Gold campaign during Childhood Cancer Awareness Month.

Amazon Goes Gold is Amazon’s annual campaign to raise awareness and funds during Childhood Cancer Awareness Month. In addition to partnering with hospitals and research organisations around the world, Amazon also wraps a selection of its delivery fleet in gold ribbons during the month of September to further increase awareness across its network. The Amazon Goes Gold campaign was launched in 2017.

“It’s fantastic to see so many of the team at Amazon in Manchester come to work in their pyjamas in support of Childhood Cancer Awareness Month. I’d like to thank Imani and the local team for raising awareness through #AmazonGoesGold and for providing us with a donation, which will be greatly appreciated by everyone at the children’s hospital and in the Charity team.”

While we’re all facing a global pandemic, more than 300,000 children will also be diagnosed with pediatric cancer this year, and it’s the number one non-communicable disease causing the death of children around the world.

“We’re incredibly proud to partner with Royal Manchester Children’s Hospital Charity for Amazon Goes Gold,” said Imani Change, Site Leader at the Manchester Amazon fulfilment center. “We want patients and kids everywhere affected by childhood cancer to imagine the future innovators in themselves. It’s an honour to make a difference for such an important cause that affects families around the world.”

This donation will support our mission to support excellence in the treatment, research and care that the hospital can provide to our young patients. 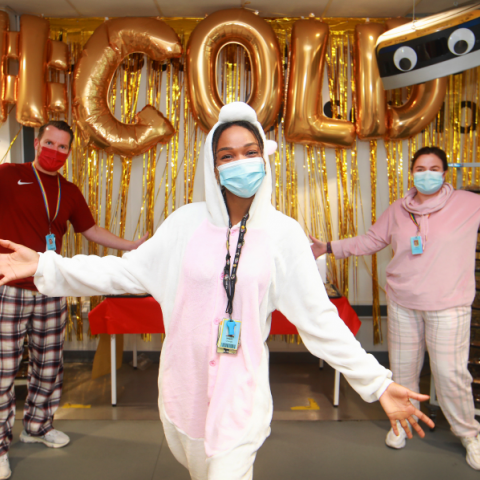