A TEAM of cyclists will battle uphill struggles, cramp, stifling heat and some serious cases of saddle soreness in honour of a very special little boy.

In 2013 Joel and Amy Turner lived every parent’s worst nightmare when their unborn son was diagnosed with a large tumour on his spine. While he was still in the womb, doctors explained Amy would have to be induced early, so the tumour didn’t grow any bigger.

Thankfully, little Harry’s tumour turned out to be non-cancerous tumour known as sacrococcygeal teratoma. But he still had to undergo surgery and many months of treatment – a heart-breaking and worrying time for his parents and family.

Now dad Joel and six friends will be cycling more than 1,000 miles from Barcelona in Spain to Royal Manchester Children’s Hospital, to raise money for charity.

“It was the hardest time of our lives – when you have a newborn baby who isn’t well it puts everything else into perspective,” said Joel, 34, who lives in Sale.

“The tumour had displaced part of his left bum cheek, so you could see the lump when he was born. But thankfully it was covered in skin, so we were able to hold him and cuddle him.

“He had to wear a six-month-old size nappy because his bottom was so big and distorted.

“The tumour was non-cancerous but it was a type that could easily turn cancerous, so he had part of his spine and the tumour removed. He was born 4th December 2013 and I was so grateful we were able to take him home for Christmas Eve.”

Joel recounts one moving moment which stuck in his mind and made him want to reach out and support the two charities.

“Harry was Amy’s second baby but he was my first, so I had no idea what I was doing,” said Joel. “Amy had finally got to sleep when Harry started crying and I just couldn’t do anything to soothe him, but I didn’t want to get Amy and disturb her.

“There were some musicians walking around the ward and they gave me a nod and came over. They did the most beautiful rendition of Twinkle Twinkle Little Star. Harry settled down and went to sleep and the musicians just nodded and smiled and went to help the next child.

“It’s such a small example but it’s one that shows the way people can do something which means so much to you at a difficult period in your life. Nothing was too much for anyone on the ward – you asked a question and needed a favour and the whole team wanted to help. I’ll never forget that type of generosity and caring.”

For this cycling adventure Joel, who is a research fellow at The University of Manchester, will be joined by colleagues Hywel Ragnauth and Tim Abram, relatives Gillian Rennie and Rebecca Locke and friends Joe Hodgson and Stuart Bogie.

However, this isn’t his first fundraising cycle for the hospital charities. He has also cycled from Land’s End to the hospital and did a Paris to Manchester cycle too. All three adventures are depicted on Joel’s body in the form of tattoos of an iconic part of the journey – the Eiffel Tower in Paris, a road sign for Land’s End and of course The Cathedral of the Holy Cross and Saint Eulalia, better known as Barcelona Cathedral.

But this will definitely be the toughest challenge yet – the team will cycle through three countries, setting off on Wednesday, 19th June. Their journey through the mountains will be the most challenging, but even on relatively easier days they’ll be cycling about 80 miles a day in 25 degree heat.

Joel said: “Day Three will be the really tough day – going over the Pyrenees. We will do 82 miles that day and climb about 7,000 feet. We’re also doing a fundraising pub quiz the night before, so even though we probably won’t drink, I think we’ll all be quite tired.

“I think the middle parts will be the hardest – when you’re tired and grumpy, the novelty of starting has worn off but you’re not near the end yet.”

The team are hoping to update followers back home via YouTube videos. Supporters can click to read updates and sponsor the group on the team’s website.

Although stepson Jacob Worrall-Turner and Harry won’t be there to cheer on Joel and the team, they’ll be waiting in Manchester to welcome back the group when they return on Friday, 5th July – RMCH Charity’s Be Seen in Green day.

Sarah Naismith, Director of Royal Manchester Children’s Hospital Charity and Saint Mary’s Hospital Charity, said: “This will be an incredible challenge for the team – three countries and more than 1,000 miles is an impressive distance.

“Hopefully Harry’s own journey at birth will inspire the cyclists and give them a reminder when they’re going through some tougher parts of the route.

“The whole charity team wish Joel and the riders the best of luck. We can’t wait to greet them at the finish.”

The support of both Charities means the hospitals can provide additional resources that make life easier for patients and their families who use the hospital.

Click here to donate on the team's JustGiving Page. 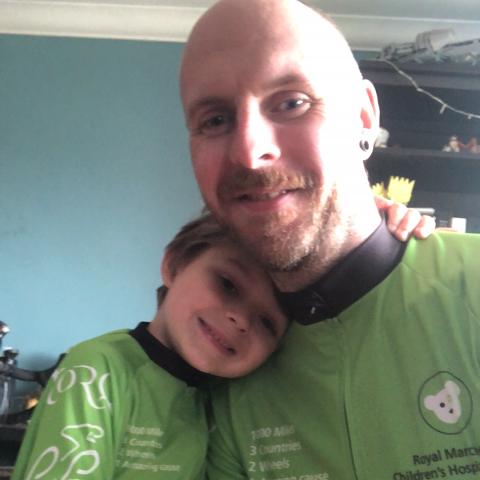