Home > Why help us > Our patients > Iqra Ahmed

Iqra Ahmed from Oldham was 12 years old when she was diagnosed with ALL (acute lymphoblastic leukaemia). Now 14 years old and on her maintenance treatment plan, Iqra tells us about her experience of cancer and treatment at Royal Manchester Children’s Hospital as part of Childhood Cancer Awareness Month…

It was the last day of school before summer in July 2019 and me and my friends were supposed to be walking home together. My legs just gave up and I couldn’t walk – it was really scary. My friend’s mum came to pick me up instead.

We already had a GP’s appointment sorted because I’d been having back aches, but when we went to see them I was sent home with some ibuprofen. The doctor thought perhaps it might be growing pains or just some muscle ache.

When it didn’t improve me and my mum went to the A&E at Oldham Hospital and there we found out my white blood cells were low. We stayed overnight and the following morning they told my mum the results of the blood test showed leukaemia.

I wasn’t told at first, but I could see my mum was really upset. She broke down and didn’t know what to say. We called my auntie and she came to the hospital for us. I then went in an ambulance to Royal Manchester Children’s Hospital – I knew something was definitely wrong and it was serious. I’d never seen my mum so upset. The family tried to get hold of my dad, who was abroad at a funeral. At first they didn’t tell him over the phone – just that he had to come home. But he was so worried they eventually told him what was going on. When my dad was back they told me it was ALL (acute lymphoblastic leukaemia). I knew what leukaemia was so it did feel really scary. But at the same time it felt like it wasn’t real, like it wasn’t happening to me.

Everything was quite quick after that – the doctors came in to explain what was going to happen with the treatment plan and I had a Hickman line put in. That’s a tube they put into a vein in your chest so they can give you the treatment. They also said I’d be in hospital for a while.

The first few days were a struggle as I found it difficult to walk. But the physiotherapists really helped me. And I made lots of friends on the ward. I had a favourite nurse but I can’t tell you her name as I wouldn’t want them to know who my favourite was, they were all so lovely. And Sophie in the play team was really nice too. A week before school began in 2019 I was allowed home and I began doing one day at school. But then there was some confusion about my medication and I didn’t realise I was taking something I should have stopped taking, so ended up with some swelling in my throat and I was back in hospital. That time I ended up staying in hospital for four weeks.

During that time I had to feed through a nose tube as I couldn’t eat food properly. Everything I tried to eat I would throw up. That was a really bad period and I didn’t like being in hospital that time. It was hard for my parents too as they were trying to work and also look after my three siblings. I really appreciate now everything that they had to sacrifice for me. They were either working or looking after the children or seeing me in hospital. It must have been so tiring and stressful.

Everyone on the ward was really nice though and that made things easier. I enjoyed sneaking around and hiding behind things to jump out and scare the nurses and doctors. I think they knew I liked being cheeky.

I was in hospital in February 2020 when Max and Harvey came to visit to film one of their CBBC episodes of FOMO. That was a good day in the hospital. I‘m a big Liverpool FC fan so I was wearing my Liverpool shirt when we were filming the programme. It was funny because I had to wear it backwards so the logo wasn’t on show for the filming. But I spun it round again when I got a picture with Max and Harvey. I wanted the shirt in the picture! Max and Harvey’s visit was also during the time that I was feed through a tube and they did a challenge where they made each other eat these disgusting pizzas. In fairness I wouldn’t have eaten a lot of things on the pizza, but I did want to try the blue cheese. That looked nice. After the filming the Charity team arranged for them to come and sing songs on the ward. Sometimes it can be quite boring in hospital when you’re there for a long time, so it’s good when things like that happen. I also really liked it when people came in to do facepainting.

I had quite a few periods in hospital. The shortest stay was three days and the longest was about six weeks. Most stays were for a few days, depending on how bad I felt. Other times I would just be in daycase so I didn’t have to stay overnight.

When I’ve been in daycase I’ve seen a lot of children ringing the End of Treatment Bell. I would often wonder when I would get to ring the bell. I’m now hopefully going to be ringing it in November. I can’t wait to get it done – mainly because ending my treatment means we can travel abroad again. I’m really excited to have a holiday.

Being treated for leukaemia has made me think it would be good to be a nurse or a doctor when I am older. I’ll maybe do something to do with medicine but I’m not sure as there are so many jobs. It was nice seeing how much the nurses do for you and how much they help people. I think I would enjoy helping people too. 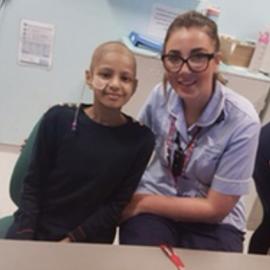