Home > Why help us > Our patients > Hughie Higginson

Hughie Higginson was just 10 years old when, in September 2020, he was told his sore legs and weight loss were down to acute lymphoblastic leukaemia. Here, he shares his story for Childhood Cancer Awareness Month – exactly a year on from his diagnosis….

I’d had some aches and pains in my chest and in my back, but then it started getting worse in my legs and my knees were getting sore. Some people said it might be “growing pains” but we wanted to get it checked out and at the time [during the Covid pandemic] that meant going to our local A&E.

I had some blood tests but they didn’t really show anything, so we asked the doctors if it was okay to go on holiday and they said it would be fine. But when we were on holiday I started losing weight and my back was still sore and I was having back spasms.

When we came back off holiday we went back to our local hospital to have some more blood tests. Some of the levels were a little bit “off” but not enough to really show anything. I spent a few days in school but then I still wasn’t well so I went back and forth to hospital a few times. I had more blood tests and some of my counts were low so they referred me to Blackburn and I had a scan.

They still didn’t really know what was going on so we were sent to Ward 84 at Royal Manchester Children’s Hospital (RMCH). I had lots of different specialists looking at my notes.

I was a bit concerned when I first got onto the ward. It isn’t just a cancer ward, but lots of children do have cancer there. So seeing lots of children with bald heads I think shocked my mum a bit. But I was more concerned than scared.

It was another two weeks before they diagnosed me with leukaemia – one week at my local hospital and another week at RMCH. They told my mum and dad first and they knew I’d be worried because we had a family friend who sadly died from leukaemia. She was an adult, so the first thing the consultant told me was that childhood leukaemia was very different to adult leukaemia and I shouldn’t be too worried.

They explained it really well in a way that I understood. My consultant said it was like my body was a garden and they had found some weeds in the garden. When they killed the weeds, some of the flowers might disappear too. But then when all the weeds are dead, the flowers will grow back but the weeds won’t. I liked that they explained it in that way so I could understand it.

It was also a relief to be diagnosed because it meant I could get my treatment started. I did cry at first, but then when she explained everything I was okay. It was quick after that – the next day I had a port fitted [a simple surgery where a tube with a rubber disc at the end is implanted. It is inserted into a vein so patients can easily receive chemotherapy and other medicines]. The day after I had my first chemotherapy treatment.

I think the word “chemotherapy” is worse than the reality. You just sit there waiting for it to all go in.

I kept a diary of my treatment – the medicines I had, what I ate and how I felt that day. It’s nice looking back and seeing what I did. I really liked the bacon on the ward! Looking through the diary, I had quite a lot of bacon.

In total I was in hospital for six weeks – two weeks before they diagnosed me and four weeks afterwards. Because of the Covid restrictions I could only have one parent with me at a time and they used to switch every week. It was sad not seeing anyone else, but we talked on the phone a lot and I waved out the window to people who came to the car park to see me.

In November I lost my hair but before that mum let me style it into a mohawk. I started losing it more and more so at the end of November we shaved it off.

I know it sounds a bit strange but it wasn’t a sad time being in hospital. I made lots of nice friends and met some amazing families. I don’t think “oh it was horrible being in hospital with leukaemia” - it was just something we had to do. We just got on with it.

I’m now at home on what they call a “maintenance plan”. So I still visit the hospital quite regularly for check ups and medicine but it isn’t as full on as it used to be.

We can’t go on holidays abroad yet – just because I have to be able to get back to the hospital if anything did happen. So I’m really looking forward to the time when we can go away again. Apart from that we’re just getting back to normal life now. 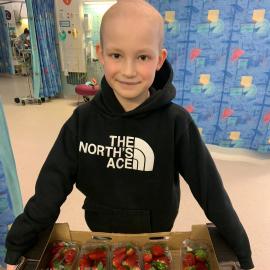