Home > Why help us > Our patients > George Edward Waites

Anna-Claire Withey’s pregnancy and birth with her son George Edward Waites was a far cry from anything she’d ever imagined. Finding out she was expecting as the very first lockdown was announced was just the start of her unusual route into parenthood. Here, Anna shares her story and explains why she and partner David Waites are supporting both Saint Mary’s Hospital and Royal Manchester Children’s Hospital….

I found out I was pregnant the day Boris Johnson announced the lockdown – 23rd March 2020. As the rest of the UK was worrying about what that would mean, I was delighted to be pregnant with our little boy. At almost 40, I thought the opportunity to have children had passed me by, so George was our gorgeous surprise.

I was lucky to have a healthy pregnancy. It was difficult when David couldn’t attend the scans but we understood we had to follow the rules and what was necessary to keep everyone safe.

We found out we were having a boy and it was funny because we joked that George was being shy for the camera. During scans he’d turn his face away or move so I couldn’t see him properly. Due to my age, I had an additional scan at my local hospital at 36 weeks. I was gathering my things together when the sonographer said they’d spotted some fluid that shouldn’t be there near the bowel.

David was waiting outside, literally 5metres away behind a glass door, when I text him to say something was wrong with the baby. We were immediately referred to Saint Mary’s where they did an MRI scan and found fluid on the left side of his head, as well as the fluid seen on the scan near his bowel. I had gone 36 weeks thinking everything was going amazing and then here I was at 37 weeks facing talks about considering a termination and what affect the fluid could have on the baby’s long-term development.

We just couldn’t face a termination so I had a planned C-Section at Saint Mary’s Hospital on 3rd November 2020. It was explained to me the baby would have to be whisked off straight away. When he was born I was too frightened to look at him in case something was wrong. But then David made me look and I’m glad I did – he was absolutely beautiful.

Our baby George was taken straight off to the neonatal intensive care unit (NICU) but not before a lovely nurse brought him to me wearing sparkly blue hat, so I could have a quick cuddle. I’ll never forget that moment, or that nurse. It was only 30 seconds but it meant the world to me and I couldn’t stop kissing him.

Then he was gone and in NICU for about a week. A doctor from Royal Manchester Children’s Hospital came to see us and said George was looking well. The fluid on his brain was no longer a concern and was put down to bad timing during the MRI scan (which is highly sensitive). The fluid by his bowel, was diagnosed as a cyst which, wasn’t affecting his bowels, so we went home as outpatients knowing we’d be back for a review. It was such a relief to be allowed to take our beautiful boy home.

A couple of days later the doctor rang to say there had been a cancellation, so we could bring George in to get the cyst sorted. He was two weeks old when he had his operation on 19th November 2020. Although it was made clear the doctor didn’t like to give a time estimate, I was told this type of operation usually takes 30-40 minutes, maybe slightly longer if the cyst is attached to his bowel.

Because of Covid I had to take George to theatre without David. I walked back clutching his baby-grow on my own too which was painfully difficult. He ended up being in the operating theatre for five-and-a-half hours! I was waiting for him on Ward 76 and I could hear the nurses ringing the theatre to see what the hold-up was. Our family were texting me to see what was happening and I didn’t have the answers.

A lovely nurse moved me to a private room on the ward and two doctors and quite a few other medical experts came with them and I honestly thought I was going to hear the worst news.

“He’s okay,” they said. I just fell back into the chair in relief. The cyst had been removed but the operation had taken so long because it was much bigger than they had anticipated. At its largest point it was the full length of his intestines and attached to his major organs from his chest downwards. They estimated he’d been about two weeks off kidney failure.

We were home just over a week after his operation but then we noticed a blister near his belly button. One evening the blister popped and I could see a hole in his tummy which would have been wide enough to get my finger in. It was the internal tract from his key-hole surgery. We rushed straight to the Paediatric Emergency Department at Royal Manchester Children’s Hospital.

We gave George’s name and were seen straight away which was just amazing. This time David was allowed in with us which was such a huge relief. People remembered us and treated us like family, which meant the world to us. George was admitted for another week and was on antibiotics.

Earlier this year (2021) George was back for another scan and this revealed he has a very slow build of lymphatic fluid in his stomach, probably caused by such an invasive operation. We’re now trying to get that under control, so he can’t have any fat and is on a special type of milk. If that doesn’t work he might need another operation.

We felt very strongly that we wanted George to be Baptised and that felt like the right time to give something back to the two hospitals. We wanted to show our appreciation for the people who had given us our son. I can’t even imagine what would have happened if we hadn’t had those amazing staff at Saint Mary’s and the children’s hospital.

Instead of presents, we asked people at the Baptism to make a donation. We managed to raise about £800, which we were really grateful for, especially as we only had 15 guests due to the Covid restrictions. In future we would like to do more and have planned to take part in some of the Charity’s events later in the year.

We look at George now and you wouldn’t know how close things were to being a different story. It’s been a really tough year, not just for us but for lots of people, particularly those who have had pregnancies during this time. But we consider ourselves to be very lucky. Having George in our lives is such a joy.

Physically I had a healthy pregnancy but attending the scans without David and everything that happened with George was so hard. We understood we had to be safe with the Covid restrictions but that didn’t make it any easier. I think it’s important to say that if you find it difficult and your mental health is suffering as a result, please do seek help. The whole experience has left me with PTSD and I’m now getting some great support. I’d urge anyone reading this who feels the same to get some help.

The experience has also made me reassess my life as a Headteacher and I’m now starting my own business, working with pregnant mums and new families. I will be maintaining my links with the Charity through the business too. Starting a new business will also mean I get to spend more time with my cheeky little boy. I’d like to thank all the wonderful staff who were so caring towards us and even remembered us weeks and months later, despite the fact they must see so many children every day. Thank you for all that you do. 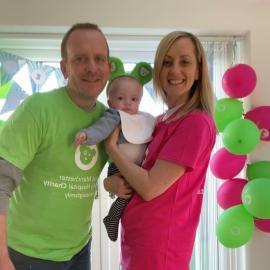