Home > Why help us > Our patients > Charlotte Drinkwater

Charlotte “Charlie” Drinkwater has a combination of complicated medical conditions and has undergone numerous surgeries in her life. She has been a patient of Royal Manchester Children’s Hospital since she was a newborn. Here, her mum Becci Barrow shares the family’s story…

Charlie always keeps us on our toes. I don’t think you can call life “boring” when Charlie is around.

She’s four years old now [summer 2021] but ever since she was born she has been in and out of hospital. To date she’s had 11 surgeries.

When she was born on Valentine’s Day in February 2017, having been diagnosed with spina bifida while still in the womb, she spent four weeks in hospital before being discharged home. But sadly she was back on the wards within a fortnight when she started to suffer from respiratory distress. She then spent a period of almost ten months in Royal Manchester Children’s Hospital. Thankfully she was home in time for Christmas 2017, but she had another long stay in March 2018.

The conditions she has mainly affect her respiratory system but she’s had surgeries for a spinal closure, a brain decompression, three shunt revisions….it’s a long and complicated list. The last surgery she had was in September 2019 and she stayed in hospital for two months. Charlie doesn’t seem to do short stays in hospital!

The combination of conditions she suffers from means she often stops breathing. It used to be that about once a week, she’ll suffer a more serious attack and go into cardiac arrest. Thankfully now the serious ones are about once every month and the non-cardiac arrest ones are about once or twice a week which is a huge improvement. Me and her father Andrew are always alert and ready to drop everything to perform CPR.

Some attacks are worse than others and we’ve learned now which ones we can handle ourselves and which ones we need to call an ambulance for. But when they do happen, it’s literally a case of stop what you’re doing and get her breathing again.

When it’s respiratory we use what’s called an Ambu-bag to pump air into her lungs and bring her round. When it’s a cardiac arrest it’s the full CPR with chest compressions. Mostly we can bring her round on our own, but we know when it’s a 999 call.

If she has a tantrum she often breath-holds. Because of the neurological makeup of her brain her breathing instinct doesn’t kick in like it should, so she goes into respiratory arrest.

When she comes around afterwards she bounces back quite quickly and then she’s on doing her normal thing. I sometimes look at her and think ‘how is she going through all that and then just carrying on?’

Her body goes through quite a lot on a regular basis, but you wouldn’t think it to look at her. She’s so cheeky and smiley. She loves playing. She loves cuddling our pet chinchilla Chilli. She’s just a normal happy girl.

She is getting so grown up now and we’ve had her confirmation for starting mainstream school in September. She can’t wait.

We got involved fundraising for Royal Manchester Children’s Hospital Charity because the staff at the hospital are like family to us. Some of the wards feel like a second home and they all know Charlie so well. They’re so supportive and good at looking after not just Charlie, but me and Andrew as well.

In 2020 my sister Jessica did a load of crazy challenges raising more than £500. She was doing things like taking a bath in stinky food and a sponsored celebrity impressions day. Charlie herself has also done some fundraising and loved taking part in Humphrey’s Lantern Walk.

We’re all very proud of Jessica and Charlie’s fundraising and know first-hand that every penny donated to Royal Manchester Children’s Hospital Charity will go towards giving children like my daughter a chance not only to survive, but thrive and enjoy life to the fullest. 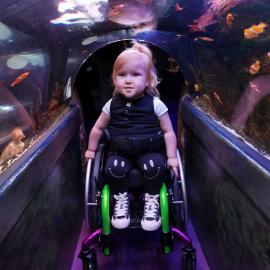