The Trust Chairman, Steve Mycio has smashed his fundraising target by taking part in the Wilmslow Half Marathon, Asics Greater Manchester Marathon and Morrisons Great Manchester Run.  Steve, who is a keen runner, set himself the target of raising £1,000 to support Royal Manchester Children's Hospital's world-class children's clinical research facility.

After completing three gruelling events, his final fundraising total sits at £1,343.23 which will help to ensure that Royal Manchester Children's Hospital isn't just the largest children's hospital in the UK, but also the very best.

The Chairman handed over his cheque to Deputy Chairman of the CMFT Charity Fundraising Board, David Cain.  David Cain commented:

"We are so grateful to the Chairman for raising such a fantastic amount.  For him to pledge his support to the Charity in such a hands on way really is special.  Hopefully this will inspire more staff to get involved in supporting the Trust Charity.  We would like to say a big thank you to Steve and everyone who sponsored him." 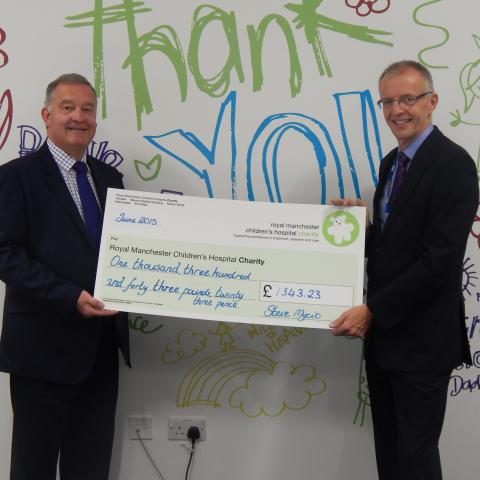