The film celebrates ten years of Royal Manchester Children’s Hospital and the words used to narrate the footage have been penned by the famous wordsmith. He was inspired by poignant stories of families from across the world who owe their young lives to the hospital’s medical teams and staff.

The 10-minute film took several months to produce. It started life as a “panning for gold” session, in which Tony brainstormed what life at the hospital meant to staff, patients and their families. From this, he created a poem and his moving words were put to film – images of hospital life, starring those who helped him in that initial session. Today that film was shown on a screen in the Hospital’s atrium for the first time. Tony Walsh and his fellow co-stars 17-year-old Declan McEntee and 12-year-old Ella Chadwick were on site for the special screening.

Tony, who himself overcame serious childhood illness, explains: “It was a great honour to write and perform a piece for Royal Manchester Children’s Hospital and it felt like one of the most important things I’ve ever done. Over the months I met with families and staff and there were so many moving stories to inspire me as well as the huge sense of pride in the lifesaving work at the hospital.”

The film features Ella and Declan who both owe their life to the hospital.  Ella was just 8 weeks old when she first became ill and needed a kidney transplant. The hospital has been her second home ever since. Declan has also been treated since he was a baby when he needed life-saving surgery for a twisted intestine and has been in and out of hospital all of his life. As a 17-year-old Declan will now transition to adult services so the film is his tribute and legacy to the children’s team.

Sarah Naismith, director of Royal Manchester Children’s Hospital Charity, said: “When we looked back over our ten years it made us appreciate more than ever the vital work and the number of lives the hospital has touched. Tony, with his talent and personal connection, felt like the perfect partner to tell our story to the world.

“An early preview at our Carols in the City evening at Manchester Cathedral last month was met with cheers, tears and applause.”

“So here you are, come near come far, come see it for yourself. Maybe some day you will need it. Maybe some way, you can help.”

“There is a hope that we are born with, it’s the love of life itself. It ignites us, it unites us, work together, we can help.”

Tony’s work came to world-wide attention in May 2017 when he was broadcast globally from the vigil for the victims of the arena bomb.

This film not only showcases the amazing work of the hospital, but also reminds viewers of just how important the hospital’s Charity supporters are.

The Charity exists to support excellence in the treatment, research and care provided to 750-plus children who walk through the hospital doors every single day.

Reminding viewers of the serious message behind the poem, Tony leaves his audience with the words “every child counts” – urging the audience to make a donation to the hospital’s charity, so it can continue delivering the highest possible standards of care in one of the friendliest environments for children. 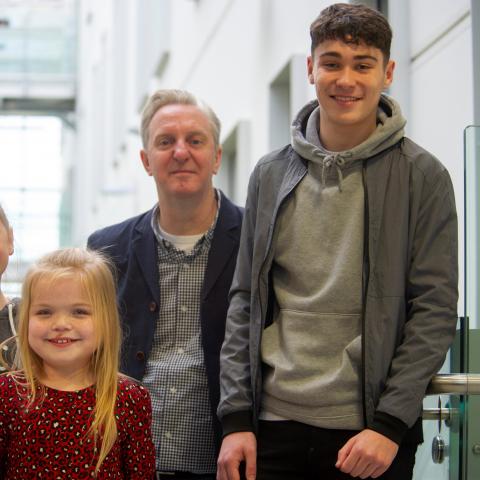