The supporters of children’s charity Thinking of Oscar stopped off at Royal Manchester Children’s Hospital as part of their #TOO500 tour of six major UK children’s hospitals. This was a particularly special week to visit the Manchester hospital as RMCH is this week celebrating its 10th birthday at the Oxford Road site.

The cyclists were greeted by RMCH Charity and hospital staff and well-wishers  before setting off again on their gruelling mission.

Using funds raised via the #TOO500 event the hospitals, including Royal Manchester Children’s Hospital, will collaborate on innovative projects to improve child health care and well-being via technology with the charity.

David Cole, of Thinking of Oscar, said: “It’s great to reach Royal Manchester Children’s Hospital. The welcome we received was fantastic and it means so much to us to receive such positive support from the staff at Royal Manchester Children’s Hospital. We’re here to highlight the need for a focus on funding for innovation to help child healthcare, to ensure it is treated on a par with the adult sector.”

Sarah Naismith, Director of Royal Manchester Children’s Hospital Charity, said: “We were pleased to welcome the Thinking of Oscar group, especially considering just how many miles they’ve covered and how many more they still have to go.

“We’re so grateful they’ve chosen to support our Charity and we wish everyone involved the best of luck with the rest of their challenge.”

Lancashire father Dom Raban, 57, who developed an app for children in hospital after his daughter’s cancer treatment, is one of the cyclists on the #TOO500 event. Mr Raban’s daughter Issy was diagnosed with cancer aged 13 in 2011 and was treated at the Royal Preston, Royal Manchester and the Christie hospitals. He founded Manchester-based digital innovation agency Corporation Pop in 1991. Mr Raban is due to take part in the last leg of the event cycling from Great Ormond Street Hospital in London to Blenheim Palace in Oxfordshire.

Thinking of Oscar was set up by Hannah and David Cole in memory of their son Oscar who died suddenly and unexpectedly on June 19th 2014. They founded Thinking of Oscar with the objective of enhancing the experience of children and their families in hospital care by investing in projects and innovations within child health which have the potential to benefit children nationally. 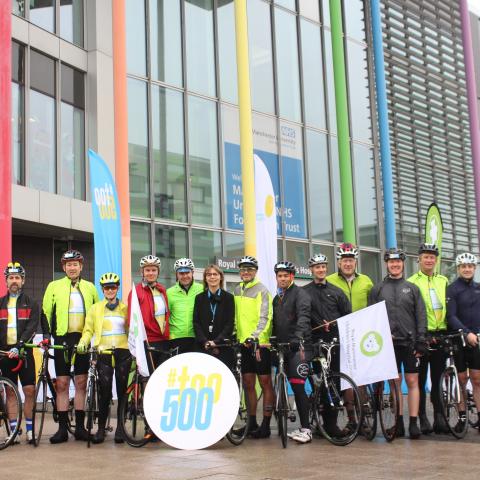