Now in its sixth year, the ‘Many Hands’ fundraising campaign was first launched by the charity in 2008, and encourages north-west businesses to support their local children’s hospital by signing up to a fundraising target of £1,000. Participating businesses will be challenged to come up with a unique and innovative fundraising initiative to raise their £1,000 over a six month period. At the end of the six month competition, shortlisted companies will be invited to pitch their ideas to a panel of judges, including Theo himself, in a bid to be crowned Many Hands Champion 2018.

The competition will kick-start with a launch event on 11th April, hosted by former MEN editor and Charity Board member Paul Horrocks at Manchester’s National Football Museum. The launch will include a Q&A session with Theo and the chance to learn more about the campaign.

“I’m delighted to be hosting this year’s Many Hands Campaign. This campaign’s longevity is testament to the principle that philanthropy can be an integral part of any company’s ethos. By working together, businesses can make a real and lasting difference.

“I’m proud to have been on the fundraising board of Royal Manchester Children’s Hospital Charity for the past 8 years and look forward to playing a special role in this campaign.”

The last five Many Hands campaigns have collectively raised £300,000 and seen over180 companies get involved from across the region. It has seen companies come up with a diverse range of fundraising initiatives from home-grown festivals at the foot of Snowdon to gruelling cycling challenges.

All funds raised by this year’s campaign will be used to complete the refurbishment of the Winnicott Centre, home of the Child and Adolescent Mental Health Service at Royal Manchester Children’s Hospital.  The Centre treats children and young people aged between three and 18, with conditions including depression, eating disorders, Obsessive Compulsive Disorder and self-harm.

Participants in this year’s Many Hands Campaign will collectively support the provision of artwork throughout the centre, including the reception area, consultation rooms and the Family Group Room.  The artwork will incorporate characters and a storytelling narrative, with a sensitive and creative approach to colour, aimed at reducing anxiety and increasing self-confidence for our young service users during intense and distressing times of their lives.

“Many Hands is a fantastic campaign which encourages companies to come together to collaboratively raise funds for larger projects at Royal Manchester Children’s Hospital. This year, money raised will be used to complete refurbishment of our hospital’s Child and Adolescent Mental Health Service Unit, making a big difference to the young children treated here. We are extremely grateful that Theo will once again be spearheading our Many Hands fundraising campaign and are confident that his support will help us to achieve this year’s £50,000 fundraising target.” 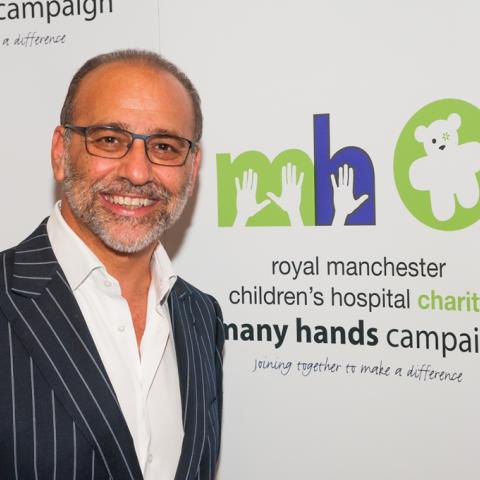