Teenagers are Busking for Bucks

20-year-olds Caitlin Peers and Saffiyah Keig-Momin from Bramhall have been busking for bucks on behalf of the Royal Manchester Children’s Hospital.

Since the age of 13, Caitlin and Saffiyah have played flute and violin to entertain listeners and have raised a very impressive £4,252.16 for the Children’s Hospital, which will help to provide additional resources that make life easier for patients and their families.

Since playing together in the Trafford Youth Orchestra, the two childhood friends have devoted their musical talents to raising money for the Children’s Hospital and have busked outside supermarkets, garden centres, and in numerous wards in the Royal Manchester Children’s Hospital throughout the seasons.

In 2009, their first charitable busk was at the Notcutts Garden Centre in Woodford. The garden centre generously doubled the amount raised which meant they could donate a brilliant £950 to the charity. In more recent years, the teenage musicians have been joined by Caitlin’s younger sister, Freya who plays the clarinet, and friend Josh who plays the saxophone. They have built a wonderful reputation for their musical talents amongst the supermarkets; Tesco, Sainsbury’s and Marks and Spenser in Handforth and Altrincham for entertaining shoppers with their music and raising lots of money for a great cause.

“We love coming to the Children’s Hospital to play our music for the patients and staff. We brought the children some instruments such as triangles and drums so they could join in and they loved it! The children made us a thank-you card which was truly heart-warming and we were able to see the difference we are making which keeps us coming back.”

“We will continue busking and raising money for Royal Manchester Children’s Hospital because it means so much to so many people. Whenever we have busked at local supermarkets there are always people who come up to us and thank us because the charity is close to their hearts and they have a personal connection to the hospital.”

Caitlin is currently studying Medicine at Cardiff University and Saffiyah studies Music at Oxford University. Now in their third years at university, and despite their busy schedules, the two girls are still very much committed to their fundraising and will continue to busk for the hospital.

“We are incredibly thankful to Caitlin and Saffiyah for putting smiles on the faces of the children in our hospital time and time again with their music and for continuing to support us with the money they raise throughout the year. Our charity depends on the generosity of our brilliant supporters, and it is thanks to people like Caitlin and Saffiyah that we are able to make a real difference to the patients, by ensuring they continue to receive the highest quality treatment in the highest quality facilities.”

Caitlin and Saffiyah have already planned their next supermarket busking dates as the 21st, 22nd and 23rd December at Tesco in Handforth and we hope to see them back at Royal Manchester Children’s Hospital in the very near future. 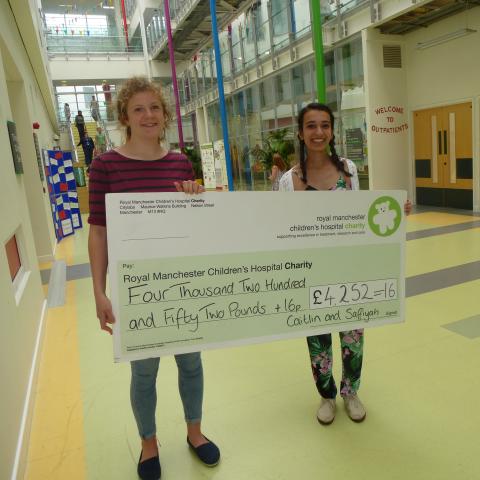