On 18th July the Taylor family will be walking from their home town of Bolton to Royal Manchester Children’s Hospital to raise money for the place very close to their hearts. The fundraiser is aptly known as the ‘Titanium Walk’ due to the screws and rods inserted in 14 year old Brooke Taylor’s back.

One year ago, almost to the day of the walk, Brooke underwent a major operation to straighten her spine. Following rehab of gradually building up her strength through walking, the Titanium Walk was originally scheduled for 27th March. However, the unthinkable happened and only weeks before the walk the metalwork in Brooke’s back fractured meaning bolts had to be replaced as soon as possible. The irony of situation aside, Brooke is now raring to go, despite her setbacks.

Brooke has been treated at Royal Manchester Children’s Hospital since birth and the sporty family are regular fundraisers for the charity having completed an impressive 16 runs for the hospital over the years.

In the words of Brooke’s mum, her daughter has undergone more operations than birthdays due to being born with a rare pelvic tumour called a Sacrococcygeal Teratoma. The condition had never stopped Brooke leading a full and active life until January 2014 when she was given an additional diagnosis, Congenital Spondylolisthesis, a birth defect which meant her spine had slipped out of place, resulting in lower back pain and pins and needs down both legs.

The titanium screws and rods inserted to hold her spine in place meant no sport or physical activity until after her bone graft had fused. The recent surgery in March has extended Brooke’s no sport ban but she has been focusing her efforts on walking, although not always easy, the teenager has been determined to keep going.

Setting off at 9:30am on the 18th July the group of 30 walkers are hoping to reach the children’s hospital in an impressive 7 hours. Brooke, along with parents Mark and Melissa, will be joined on the 18 mile walk by family, friends and staff from the hospital.

Funds raised by the walk will go towards supporting excellence in research, treatment and care at Royal Manchester Children’s Hospital. The Diversions Support Group will also benefit from sponsorship, a group set up by Melissa to aid those with similar conditions to Brooke’s.

“I love seeing children being ‘fixed’ and it’s nice to watch them having fun and getting on with their lives like I have been able to do. The hospital is like my second home and I want to do all I can to help. My recent setback has made me more determined than ever to complete the walk and to raise as much money as possible for the children’s hospital and Diversions”

Waving off the group will be Royal Manchester Children’s Hospital Charity’s mascot Humphrey, who will also welcome the tired walkers when reaching their end destination. In 2013 Melissa even completed the Great Manchester Run as Humphrey!

“The Taylor family have been valuable supporters of the hospital for many years and they never fail to amaze us with their next fundraising venture. No matter what challenges are thrown at Brooke she takes all in her stride and never complains, just wanting to help other children like her. It’s lovely how the walk will be ending at the hospital, a fitting tribute to the challenges which she’s overcome to get where she is today. We wish everyone involved the very best of luck, it is sure to be an enjoyable day for everyone involved!” 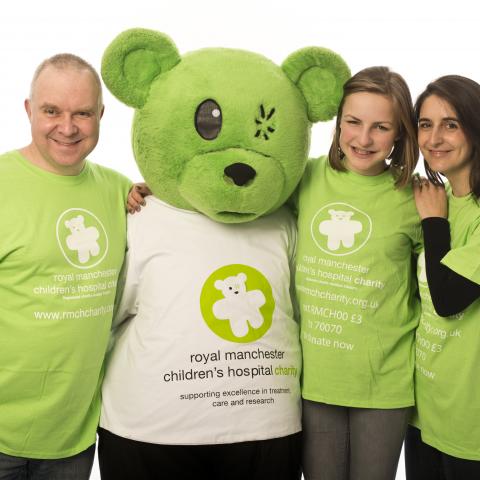