Patients at Royal Manchester Children’s Hospital got quite the surprise on Thursday morning when a team of the world’s most famous superheroes abseiled down the hospital’s building.

Joining the abseilers, from company ORB Rope Access, was the hospital’s charity Mascot Humphrey the Bear who cheered up many of the children who were too poorly to leave their rooms, waving at the youngsters through the ward windows, spreading many smiles across the hospital.

The abseil marked the launch of Royal Manchester Children’s Hospital Charity’s (RMCH Charity) fundraising abseil taking place later in the year. Humphrey’s Heroes, on 13th & 14th May will offer over 150 participants the chance to abseil down Liberty Heights in Manchester City Centre to help raise funds to support poorly patients at the Children’s Hospital.

The Charity is encouraging participants to don their capes dressed as their favourite superhero as they descend the 240ft building at Manchester’s tallest abseil.

The event, kindly sponsored by National Car Parks (NCP), Sodexo and organised by Over the Edge asks participants to raise a minimum amount of £250 per person to raise funds which will help the hospital to offer patients the best possible care by developing and delivering world class treatment, research and care.

One superhero who has already signed up to the challenge is Divisional Lead Nurse at Royal Manchester Children’s Hospital, Walter Tann.

“I’ve worked at the Children’s Hospital for over 20 years so know better than anyone how much of a difference charitable donations can make. Extra funds will go a long way in helping our hospital provide the very best treatment, research and care for our poorly patients. Without a doubt I’ll be scared on the day but it’s absolutely nothing in comparison to what many of our patients face with such bravery every day. They are the real superheroes and if I can do my bit to help raise some money then it’s the least I can do.”

At ground level further superheroes entertained patients in the hospital’s atrium, characters such as Batman, Wolverine and Wonder Woman kindly provided by, Heroic Alliance, a not for profit organisation formed from a group of costume and prop-makers.

“Today was all about spreading some delight and happiness to the patient, families and staff at our hospital, and from the many smiling faces I’d say our mission was accomplished! Many of our patients can find themselves in hospital for lengthy periods of time, so special events like this really do make a huge difference in lifting their spirits.

It was also a brilliant launch for our upcoming public abseil in May; we encourage anyone who is feeling inspired to don their capes and to try something different by scaling down Liberty Heights with us, raising funds for a very worthy cause.” 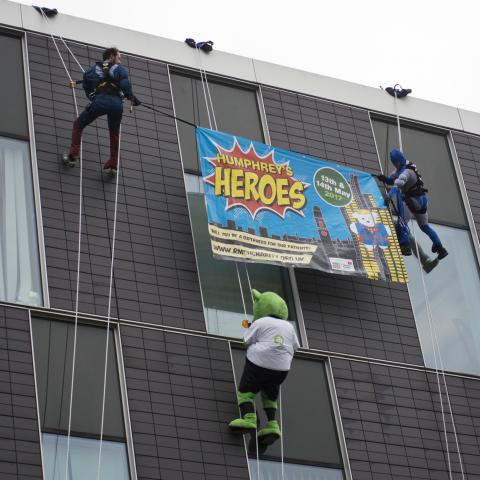