Manchester based actors Jamie Lomas and Anthony Quinlan joined over 90 plucky fundraisers to head ‘over the edge’ at the weekend, completing a charity abseil in support of Royal Manchester Children’s Hospital.

The brave fundraisers, made up of groups of hospital staff, charity supporters and local businesses including teams from event sponsors Sodexo and building partners Liberty Living, descended 240ft from the roof of Liberty Heights, a landmark building in Manchester City Centre.

The ‘Humphrey’s Heroes’ themed Abseil is the Charity’s first ever public abseil which saw participants abseiling dressed as their favourite superheroes. On the day a team of fundraisers chose to dress as doctors and nurses, who they said are the real superheroes for young patients at the Children’s Hospital.

Best friends Jamie Lomas and Anthony Quinlan showed their support to their local hospital by bravely taking on the challenge, being in one of the first groups to head over the edge.

“Fundraising for charity is all about doing something out of the ordinary, and when I stood on the building’s roof and looked down I realised that we’d definitely set ourselves a challenge! The abseil really got my adrenalin running and was such an amazing day. I’m thrilled that we’ve raised money for such a wonderful cause and I’d like to thank everyone who sponsored and supported us on the day.”

“I had so much fun doing the abseil at the weekend; it really was an incredible experience. The hardest part was the initial going over the edge, seeing that it was just ropes holding you up, but once I got into it, I loved it! Knowing the money me and Jamie have raised is going to such a worthwhile cause is such a good feeling.”

Family and friends of those taking part cheered on participants as they made their way down the 240ft distance to ground level. Many of this year’s abseilers have already far exceeded their individual fundraising targets of £150, bringing the total raised so far from the charity abseil into the thousands, with more donations and sponsorship to come in the weeks following the event.

All money raised from the abseil will go towards the Charity’s fundraising appeal to build a 24 hour access helipad on location at the hospital’s Central Manchester site. An on-site landing pad will help to dramatically reduce patient transfer times by up to two thirds and in turn will help to save lives and improve patient recovery.

“A huge thank you to all the heroes who abseiled at the weekend, making the event such a huge success! After months of planning it was so exciting to see the event come together, and to see so many people face their fears in support of our Helipad Appeal. We could not have done this event without the support of our sponsors Sodexo and Liberty Living who kindly leant us their building for the day. There was such a great atmosphere on the day and I’m thrilled with the amount raised so far which will go towards such a vital project for our hospital.” 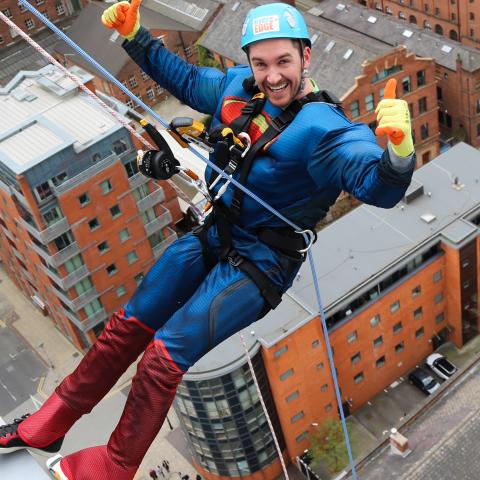