A host of Manchester Stars came together for the third annual Christmas Carol Concert in support of Royal Manchester Children’s Hospital Charity.

Key 103 Presenter Mike Toolan hosted the Christmassy affair at Manchester Cathedral with traditional and contemporary readings from celebrity supporters of the charity including Coronation Street’s Faye Brookes and Emmerdale star Joe Gill, as well as some festive readings from patients and hospital staff.

Fay Brookes commented: “I was thrilled to be a part of such a special and magical evening. Royal Manchester Children’s Hospital is such an inspiring place with incredibly brave patients and it was an honour for me to speak at the Carol Concert this Christmas, in aid of a fantastic cause.”

More than 800 guests attended on the night, enjoying incredible performances from the choirs of Manchester High School for Girls, Manchester Grammar School and The Little Belters Choir, of Dragons’ Den fame. Those in attendance, including Carl Austin-Behan, Lord Mayor of Manchester joined in with up-beat congregational numbers, helping to set the scene for Christmas.

The event was raising vital funds towards the charity’s One Big Toy Campaign, which aims to create a new, fully equipped multi-sensory room at Royal Manchester Children’s Hospital, so that families with very poorly children can enjoy some much-needed space away from the clinical ward environment.

The multi-sensory room will give poorly children a place to go and chill out when they are feeling anxious about having treatments and surgeries. It can be a place to have fun, jump around and let off some steam after feeling confined on the ward. Or it can be a place for seriously ill children and those with restricted movement to relax, stimulate the senses and take their mind off their pain.

“Our annual carol concert is always a joyous occasion and this year was no exception. It was brilliant to see so many people enjoying themselves ahead of Christmas in such a breath-taking venue. I’d like to thank everyone that came along to help raise funds towards the new multi-sensory room at our children’s hospital, and of course all our readers and choirs who helped make the evening so special.” 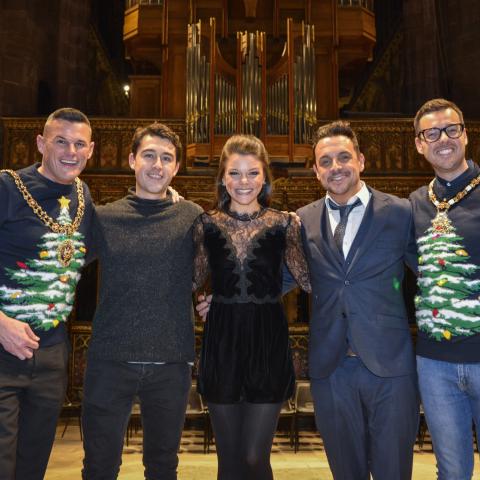