Assisted by three patients who entered a competition to help with the special task, the group flicked the switch to transform the hospital’s atrium at the largest children’s hospital in the country.

“I was really pleased to be chosen to switch on the lights and it was really cool meeting everyone from Coronation Street.”

Also spreading some festive joy and entertaining the crowds of patients, families and staff were the Ugly Sisters from Manchester Opera House’s production of Cinderella, the duo (named Cheryl and Rita) feature in the festive production also starring ice skating legends Torvill and Dean.

The switch on was led by hospital reverend,  Peter Gomm, with  carols performed by Manchester High School for Girl’s prep choir and the congregation. The charity mascot, Humphrey, was also on hand to entertain the crowd in his Santa suit, as well as Emmet and Wyldstyle from the Lego Movie. The characters travelled from Manchester LEGOLAND® Discovery Centre to pay a special visit to the patients.

“We’re delighted that we were able to come down to help switch on the lights this afternoon, it’s great being able to meet so many patients and seeing the smiles on their faces. It makes you release how lucky we are having such a fantastic hospital on our doorstep.”

“The Christmas light switch on is always a highlight at the hospital, both patients and staff enjoy getting together to celebrate the start of the festive season. Although many of our patients are very poorly we do our best to make their stay with us as enjoyable as possible. Events like this really do make a difference. I would like to thank everyone who has volunteered their time to make today happen, we really do appreciate their support in making the light switch on a success.” 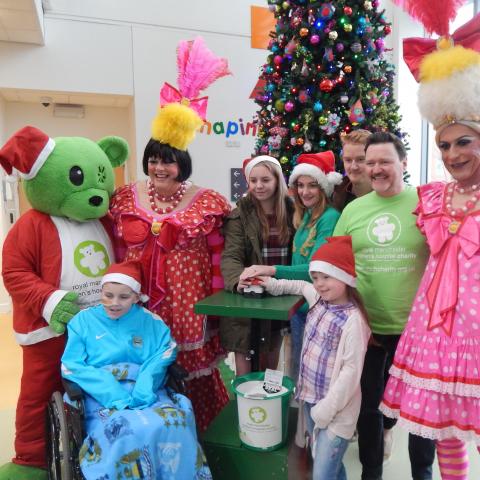