Stagecoach has revealed a new bus wrap design to commemorate the first anniversary of the Manchester Arena attack, which, last May, saw 22 innocent lives lost.

The bus has been dedicated to those killed, injured or affected by events last year, as well as to staff at Royal Manchester Children’s Hospital who treated the majority of children injured in the attack.

The design features touching quotes from two children who were treated at the hospital following last year’s attack. 15-year-old Adam, wrote: “The fact I was able to go home earlier than expected was due to the outstanding care and compassion that I received at Royal Manchester Children’s Hospital.”

The design also includes 22 Manchester bees, which have become a widely recognised symbol of the strength that the city demonstrated after the attack. It also features a-text-to-donate number on the rear to encourage local people to help support the pioneering care which takes place at the hospital each day.

Elisabeth Tasker, managing director of Stagecoach Manchester, said: “The way Greater Manchester has come together as a region, with the considerable support of people across the United Kingdom and beyond, is a firm demonstration that love will ultimately always triumph over hate.

“We’ve created this bus wrap design as both our own way to remember those who were lost or injured in the attack, as well as a symbol of recognition for the everyday heroes, such as hospital staff and the wider emergency services, whose actions prevented this tragedy from being even worse.”

Sarah Naismith, Head of Royal Manchester Children’s Hospital Charity comments: “We are incredibly grateful to Stagecoach and all their employees for the support they have shown to our Children’s Hospital. The whole of Manchester, and beyond, came together following the horrific attack and this commemorative bus is a fitting way to remember all those involved last May.” 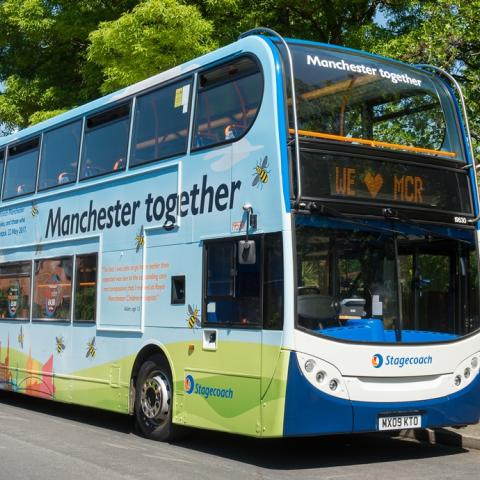