Today Coronation Street and Emmerdale stars visited Royal Manchester Children’s Hospital to hand out presents to some of the hospital’s poorliest patients and to sprinkle a bit of festive cheer.

Taking time out of their busy filming schedules were Coronation Street stars and Charity supporters Antony Cotton, Jennie McAlpine and Brooke Vincent. The stars spent time on Ward 84, the children’s cancer ward at the hospital, which looks after young patients with the condition from across the whole of the North West, before saying hello to patients on the Bone Marrow Transplant Unit.

The hospital’s young patients and their families were delighted to meet their favourite soapstars, who handed out presents and chatted to the young children.

Long-term Patron Antony Cotton commented: “Visiting the Children’s Hospital at Christmas time is always one of my favourite times of the year. Meeting the patients and their families is always humbling, heart-warming and a huge privilege and is something I cherish as a patron of Royal Manchester Children’s Hospital Charity.”

Emmerdale Star Joe Gill (Finn Barton) and Gemma Atkinson (Carly Hope) also came along to the hospital to spread some festive cheer. Joe and Gemma, who have both previously ran the Manchester 10k for the Children’s Hospital, handed out gifts and spent time chatting with children and their parents on Ward 78, the hospital’s Spinal, Orthopaedic and Neurosciences Ward.

Bury born Gemma Atkinson added:  “It was so lovely being able to visit the brave children on Ward 78 and to hand out presents and put smiles on the children’s faces.  I’ve met some fantastic people, the hospital is such a special place and that’s why I’m thrilled to be supporting such a fantastic Charity.”

“We are incredibly grateful to our Charity Patrons who took time out of their busy filming schedules to visit our poorly patients at such a special and magical time of year. Some of our patients have been in hospital for long periods of time, so the visit and presents really help to spread Christmas cheer and make such a difference to our children.

“We would also like to say a huge thank you to SAMBRO for their support again this Christmas. We really do appreciate their generosity in providing gifts for our patients; their presents always put the biggest smiles on the children’s faces.”

A variety of presents were kindly donated by the toy company. SAMBRO, based in Bury, who specialise in licensed ranges that encompass a wide range of different product categories including toys, arts & crafts, stationery, bags and wheeled goods. 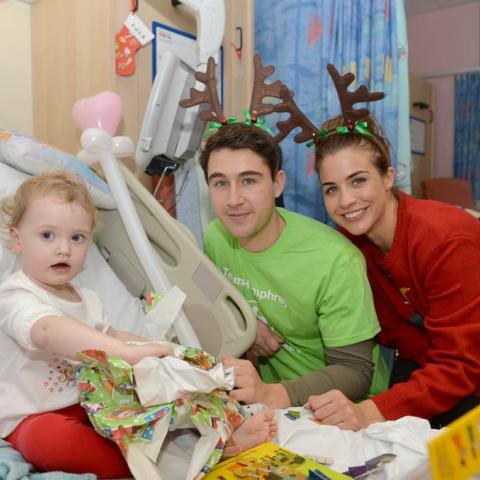