Dad-of-two, Ben Cross from Blackpool has undertaken six ambitious fundraising challenges over the past six months, to raise funds for Royal Manchester Children’s Hospital which saved his little boy’s life.

In March 2016 Ben’s son Charlie was just four-years-old when a bout of chickenpox and a strep infection led him to contract necrotising fasciitis, a rare but serious bacterial infection that attacks the body’s soft tissue and sepsis. Charlie was blue-lighted to Royal Manchester Children’s Hospital and admitted to the Paediatric Intensive Care Unit where he underwent five life-saving operations in just one week. The surgery removed any infected tissue from Charlie’s chest area and thankfully, after the first week he was off the ventilator and breathing for himself.

Ben comments: “To see Charlie go from a happy, care-free little boy to being on life-support was just horrific. Seeing him so poorly was absolutely devastating, but we knew he was in the best possible hands as the staff were just incredible. Thankfully the operations were a success – the surgeons really are miracle workers and Charlie was transferred to the hospital’s Burns Unit.

“It was such a relief when Charlie started talking again and enjoying having visitors at the hospital. He underwent further operations for skin grafts and then Charlie started the long road to recovery. He was in hospital for a month in total, and then we were able to take our little boy back home.

“Words will never be enough to show how thankful we are to the hospital for saving our son’s life. We wanted to do something to repay them as the staff are true heroes who do such amazing work. In 2016 we raised £2,800 by organising a charity ‘thank you’ event and last year we raised another £2,000 by cycling from Blackpool coast to Bridlington coast with my brother and best friend. This year we wanted to take it one step further, which is why we came up with this fundraising challenge to raise more funds for the hospital’s charity.”

To say thank you, Ben and his friends organised six challenges over the last six months ranging from swimming the length of the English Channel, 360 burpees a day over the course of a month, completing the Yorkshire 3 Peaks Challenge and The Great Swim Run. The last challenge took place in June with Ben and five friends taking on a Coast-to-Coast bike ride (approx. 180 miles) in just one day.

Ben adds: “We really wanted to push ourselves with these challenges, in a bid to raise as much money as possible for the hospital. A group of my friends and my brother wanted to get involved with the fundraising, so we came up with this set of challenges and had people supporting us along the way.”

Donna O’Reilly, Community Fundraising Officer at Royal Manchester Children’s Hospital Charity said: “We’re delighted that Ben has decided to fundraise once again for our hospital, and in such epic style! He has taken on some intense challenges over the past six months and has already raised nearly £2,000 for the hospital, which is just incredible. The money will make a big difference to the young children treated at our hospital, so we’d like to thank Ben and his friends, for all their support.” 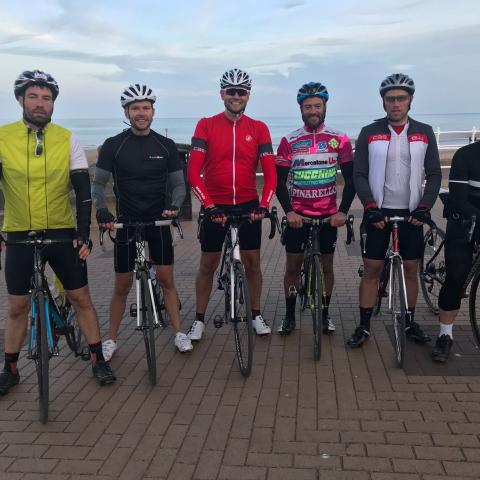